Somali pirates have increasingly been attacking international ships in the past few years, and though there have been few deaths of civilians, there is some large concern over the safety of ship crews and the need for commerce to continue in the world even at the risk of death of pirates. Shipping continues despite the threat of Somali piracy. Now it comes to guns. Is it right or wrong to defend shipping and crews from violent, maybe not-so-violent, Somali pirates? After all, Somali pirates hardly ever kill civilians in the course of their attacks. Should we kill them anyway? And who has such a right-- if we do determine to kill Somali pirates? Do civilians have such a lawful right? Isn't it murder? Maybe, because Somalis do so little actual violence, and because they are driven to it by illegal dumping of toxic waste by capitalists who blithely poison Somali fishing grounds, the natives are simply getting some just but otherwise unforthcoming economic justice, and the capitalists are over-reacting to some poor fishermen who simply want to live and feed their families. 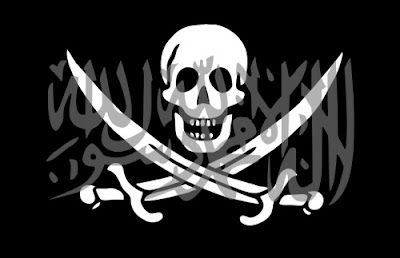 NAIROBI, Kenya — Private security guards shot and killed a Somali pirate during an attack on a merchant ship off the coast of East Africa in what is believed to be the first such killing by armed contractors, the EU Naval Force spokesman said Wednesday.

The death comes amid fears that increasingly aggressive pirates and the growing use of armed private security contractors onboard vessels could fuel increased violence on the high seas. ...

[A] pirate group approached it twice, said EU Naval Force spokesman Cmdr. John Harbour. During the second approach on the Panamanian-flagged cargo ship which is United Arab Emirates owned, there was an exchange of fire between the guards and the pirates.

[S]even pirates were found, including one who had died from small caliber gunshot wounds, indicating he had been shot by the contractors, said Harbour. The six remaining pirates were taken into custody.

Crews are becoming increasingly adept at repelling attacks by pirates in the dangerous waters of the Indian Ocean and Gulf of Aden. But pirates are becoming more aggressive in response, shooting bullets and rocket-propelled grenades at ships to try to intimidate captains into stopping.

Several organizations, including the International Maritime Bureau, have expressed fears that the use of armed security contractors could encourage pirates to be more violent when taking a ship. Sailors have been hurt or killed before but this generally happens by accident or through poor health. There has only been one known execution of a hostage despite dozens of pirate hijackings.

Pirate attacks have not declined despite patrols by dozens of warships off the Somali coast. ...

If a ship and crew are attacked by pirates, do the former have a right to defend themselves by force, violence, and killing? Do civilians have a right to use the services of private security guards to do the fighting for them? Who over-sees the legitimacy of the private security forces? Can we allow "cowboys" of the sea to simply shoot and kill anyone they say is guilty of piracy on the high-seas? Isn't this a matter of murder of victims just trying to live?
Posted by Dag at 4:10 PM No comments: Links to this post

Sarah Palin? Not this time

Not Ann Coulter, not Geo. W. Bush, not Joe the Plumber. 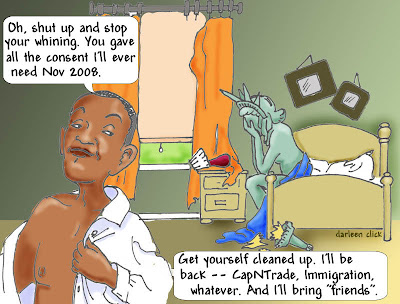 Big Bill Thomas, late of Sandwell, G.B. has died. Rumour that because he was so crooked his coffin will have to be screwed into the ground is simply mean-spirited. His boy-friend might miss him. I know I do. I'm sure you miss him too. He was big. He's got a big day off.

BILL Thomas OBE, the former Rowley councillor and the longest running ever leader of Sandwell Council, has died.

The current leader of Sandwell Council Councillor Darren Cooper led the tributes as news of his death at his home in his native Wales was announced.

He said: "It is with great sadness that we hear of the death of Bill Thomas.

"It is impossible to overlook the huge contribution Bill made to the borough of Sandwell.”

He said: "Leading the council for the best part of a decade, Bill oversaw dramatic improvements in our education achievements and wide-ranging regeneration projects that will improve life for current and future generations in the borough.”

He added: "And this is not to mention his long-standing work in the health service, which earned him an OBE.

More. And below are a few posts on Big Bill's illustrious career.

Everybody dies. Life is a vale of tears. Even so, my sincere condolences to those who cared about the man.

Posted by Dag at 1:43 AM No comments: Links to this post

Gee, the things that upset folks these days. So, in the name of being nice and inoffensive, let's take a trip down memory lane to a time when things were just peachy and communally happy, just like it will be again when all the racist, sexist, homophobic, conservative, and ya ya are silenced by "Human Rights" advocates and agents of social change and ya ya:

My Mistake. Burkas are Cool 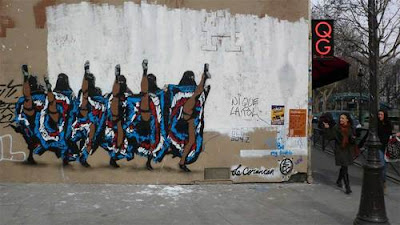 Posted by Dag at 1:18 AM No comments: Links to this post

The Temper of Our Times

I find that as I get older my private life shrinks from the large thing it was as a younger man: I don't have a mass of close friends, don't have family and social concerns of pressing import, don't involve myself in the personal lives of people I know. My interests are personal, but not so much private. My interests have shifted from privacy to publicity, i.e. from the life of myself and close ones to the lives and doing of the greater, if indistinct, general world of Man.

That, again to clarify, is to mean that were one of my friends harmed, then all my efforts would focus centrally on retribution against anyone who has done them harm, a thing I would take personally. As is, my concerns are more outward, more geared toward my greater community of souls, my nation, my civilization, my world. That, of course, involves many who share little or nothing with me in this life but world air-currents. Still, they concern me. I usually wish them no harm in any personal fashion. Which brings me to those who must be harmed. We might, you and I, call it love.

My nation and its people are strong, and strong beyond even our comprehension. Thus, when reading the piece below, I find myself concerned about the harm that will come due to our misguided strength turned these latter days to deliberate weakness. I fear the wrath of righteous men unleashed upon the weak. See here for a matter of concern to us all:

U.S. President Barack Obama has again postponed his trip to Indonesia because of pressing issues in the U.S. The trip is part of his ongoing effort to reach out to Muslims worldwide. Last year, he gave a speech in Cairo that was considered a landmark in the effort to bridge differences between Islam and the West. Many Muslims believe he should do more [sic]

No one seems to think that Muslims have any responsibility to “bridge differences between Islam and the West.” No, everyone, from Barack Obama to Jerome Socolovsky, and everyone in between, knows that the conflict is all the West’s fault. Note how Jerome Socolovsky frames the conflict:

Frictions between Islam and the West often flare up – like when when a Danish newspaper published cartoons of the Prophet Mohammed – or when Muslim girls in Europe went to school wearing veils, or new minarets in Switzerland were banned.

Note that he mentions nothing about, say, “frictions” “flaring up” when Muslims, acting in the name of Islam and jihad, murder thirteen Americans in cold blood at Fort Hood, or murder two American soldiers in Little Rock, Arkansas, or murder one and wound five in a Jewish Community Center in Seattle, or plow into a crowd of students, trying to murder as many as possible, in Chapel Hill, North Carolina. Etc.

No, none of that makes “frictions” “flare up.” Instead, “frictions” only “flare up” when a Danish newspaper has the temerity to publish cartoons of the “Prophet Mohammed” — as the mainstream media universally designates him these days, as if we’re all Muslims now. Jerome Socolovsky gives no hint that he, or any reasonable person, may think that it’s sheer madness or worse to go around murdering innocent people, or even demanding free speech restrictions, because of a few cartoons. As far as he is concerned, the cartoons — not Islamic jihad mass murders — make “frictions” “flare up.”

Our nation is strong beyond measure or reckoning. We have confused the weak by our pretences of weakness in the world. I personally have done such at times, and the result is that there has to be a reckoning of terrible correction. The Muslim world is the weakest of worlds in our universe of shared living. The Muslim world is a pathetic and sick thing filled to overflowing with ugliness and evil, now on the rampage against our sentimental civility. We kid them with our sentimentality, giving them, the "Shoe-bombers" and the "Panty-bombers" and the Mohammed Cartoon criers, the idea that we are weak and cannot resist them in their staged furies. We fake a weakness we do not have. We pretend we have no strength to fight and no desire to kill. That, dear reader, is a cosmic injustice that will come to shame us. By which I mean:

The Muslim world, emboldened to attack the world of the strong, attacks the strong, They, in their grip of the delusion of our weakness and the displays of our collective and public sentimentalities, assume wrongly that we are weak and cowardly. This is clearly not so. We, like others, are as capable of cruelty and evil as others; and we will, in time, act upon our own worst natures, as befits the common man enraged.

Personally there are few things I love more than pain and blood, fires raging out of control, the breath-taking exhilaration of explosions, the screams of the tortured, and the stillness of the dead. I like it beyond liking: I love it. I love war.

Muslim terror? Muslims are weak and stupid. I could happily live without ever thinking of such garbage people and such garbage cultures. But because we allow them to invade our consciousness on a daily, hourly, moment by moment basis, now, and for years now, I am focussed on them, and nearly them alone. Focus means they will have to suffer for it. If they'd slunk off and died like dogs we wouldn't have bothered with them. As is, they demand our attention, which is our innate evil nature's delight. I love war; and war against Muslims, regardless of their lack of nobility as worthy enemies, is my delight, personally. I don't think so often of my personal life as my personal life, preferring to think instead of my life as a public thing involved in public war.

My private life is shrunk to the smallest. My personal life is given over mostly to the thought of war, and war in this case, against Islam. It's a shameful thing to attack and destroy such worthless and disgusting primitives, but such is the fate given us by our own sentimentalists. Crushing Islam to dust, disgusting as it is for the strong to crush such weaklings, is something I can live with, given the love of war and the lack of a better class of enemy.

Posted by Dag at 1:21 AM No comments: Links to this post