You know your game is over when the uncoolest people around start imitating you. If you start out in Paris with a really ironic thesis written in obtuse jargon that only your colleagues will pretend to admire, and if you make a living at this for decades, you will eventually see it turn up at the very bottom of the intellectual barrel, right down there in the mould with the potato bugs and the spiders. Such is the Left today, all their sneering and posing has finally reached the lumpen- ? Who the devil makes comic books? This is the last stop on the intellectual skid, I think, before it all turns dark and quiet. For leftards, all ideas lead to loam. 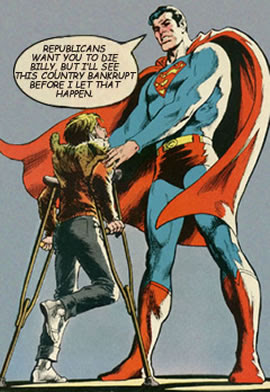 I saw dresses on sale at Walmart. They were Walmart kinds of dresses, if you know more about the details than I and think that's funny. Big, tent-like dresses for fat ladies who live in trailer courts in rural areas is the idea I'm trying to get across. Walmart had racks and stacks of these dresses, all done in patterns from Piet Mondrian, the famous Dutch Modernist painter. He was cool, way back when. Now, 60 years later, his work adorns fat ladies in their moo-moos as they waddle toward the bon-bons and t.v. remote control section of Walmart. They very likely don't know of Mondrian, wouldn't care to listen to me tell them about his colour theories and epistemology and so on. 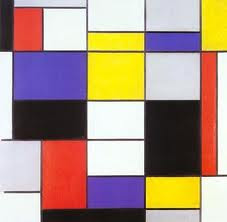 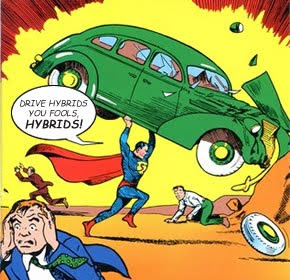 In addition to the recent announcement by DC comics that Superman will soon renounce his U.S. citizenship, this mass culture hero's reconnection with his Progressive roots will usher in other remarkable changes.

Out: Superman.
In: Super Non-Gender-Specific Person.

Out: Good vs Evil.
In: More nuanced, less judgmental view.

Out: Crime fighting.
In: Superpowers to be used only to save the earth from capitalism and bad choices.

When D.C. comix is doing ultra gauche, you know it's a matter of time before Walmart starts selling Foucault Halloween masks and everybody there gets the "irony." 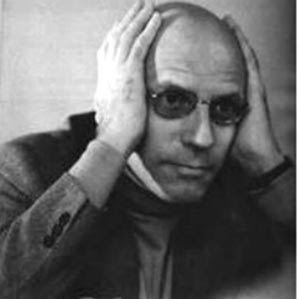 Even if they don't really get it.

John Steinbeck, according to my recollection, wrote about walking across America to get a good sense of the land and it's people, a cool thing to do for a middle aged guy with good health and lots of money. I must have been thinking of Travels With Charlie. Steinbeck drove a camper, not walking. My memory. So I might be mistaken in thinking that when he met people and they asked what he was doing, he told them some sentimental story about patriotism and love of his fellow men, and in response, people got pissed off at him and told him to get job rather than waste his time on that kind of nonsense. So, Steinbeck finally started saying instead that he was walking across America because a buddy had bet him $50.00 that he couldn't do it. Then people liked him and invited him in.

I don't know if any of my recollection is accurate. I really don't care. And worse, seems Steinbeck didn't care either. He faked a whole whack of his book! He's a novelist, but he put this one across as journalism. Not to do that. It ain't right. And it isn't any better when Rigoberta pulls the same stuff. It wouldn't be right if I did that, either. I don't. What I do is write stuff. I leave that to readers. But here we have a whole nother kind of thing that shows us ourselves in a light not so good. We have the story of some guy who's written a popular book that turns out to be a whole scam. I look at this with some interest because it tells me-- again-- that people want to believe, and they find the reasons afterward. Camus puts it well about Communists: "First they convert, then they learn the dogma." I'm reading many books about Eugenics and Neo-Malthusianism. According to me, it's the same story: people want to see too many people, and thus they find that doom looms and something must be done. People want to see racists down on Obama, so they see every critic as a racist. It's a lie, and the believers will never give it up because it wouldn't matter if it were known to be a lie or not; it's only ever all about what people want in the first place. Below is a piece on the faker who wrote Three Cups of Tea. I wouldn't know. I don't read stuff like that book. I did read the linked essay below, which I recommend highly. Truth matters. But it only matters to people who want to find it. Many obviously do not. With them there is no Reason.

I have no ideas that are so good I refuse to look for alternatives. Except my one true idea. That in the day my life is shit unless I have Three Cups of Coffee. That is close to the universal meaning of life.
Posted by Dag at 3:29 PM No comments:

The long and winding road

What happened in the year of your birth?

Thanks to Harold for the link.

"When the young grow old they die."

Harold writes ten emails a day, though none of them are original, just stuff he sweeps from the Internet, investment opportunities in "Brooklyn Bridges Inc," "Retirement Homes in Ivory Coast" "Cut-rate Sex-Change Operations in Singapore," and such stuff. Today, just in passing, he wrote me a personal note in response to something I sent him, he mentioning that he goes tomorrow for more chemo-therapy and radiation treatments.

Harold writes that he's been in the hospital since the end of January, having been out for seven days during all that time, and has lung cancer. Lung cancer doesn't surprise me. He smokes cigarettes that exterminators must use to kill cockroaches. What surprises me is that my friend is seriously ill. It happens. People get sick, and old people, which I guess Harold must be now, is sick. I never think of him that way. I think of him as a young guy full of life and wildness and far-flung hopes for the future.

The work provided the first example of the Byronic hero.[5] The idea of the Byronic hero is one that consists of many different characteristics. The hero must have a rather high level of intelligence and perception as well as be able to easily adapt to new situations and use cunning to his own gain. It is clear from this description that this hero is well educated and by extension is rather sophisticated in his style. Aside from the obvious charm and attractiveness that this automatically creates, he struggles with his integrity, being prone to mood swings or bipolar tendencies. Generally, the hero has a disrespect for any figure of authority, thus creating the image of the Byronic hero as an exile or an outcast. The hero also has a tendency to be arrogant and cynical, indulging in self-destructive behaviour which leads to the need to seduce women. Although his sexual attraction through being mysterious is rather helpful, this sexual attraction often gets the hero into trouble.

I used to see Harold every evening for a couple of years. I looked forward to that. I'd do business at an up-scale diner in the Central Business District here, and Harold would hold court and shuffle business my way. I made lots of money and had a good time at it. We'd planned a deal in the Caribbean that was, to put it mildly, pretty crazy. That was normal then. Eventually Harold ended up in Central America and I split for Africa. There was nothing we couldn't do back then.

Yet Time, who changes all, had altered him
In soul and aspect as in age; years steal
Fire from the mind as vigour from the limb;
And life's enchanted cup but sparkles near the brim.

Harold has been in the hospital for the past three months, avoiding my emails suggesting we go out for coffee. Instead, he responds with weird stuff about doing crazy things to get rich quick. Well, I guess that now there isn't a lot of time left to get rich any more. Still, I have a lot of value from knowing him. The money always comes and goes, but the life, going too, remains somewhere, if only here.

I'm left thinking about young people looking at old people. Getting old is not a character flaw, as some seem to think. It is not an aesthetic failure. It is not a social mis-step. It is what happens when people live a long time. Eventually, living a long time requires that one pay a price for it, that being death. It's not personal. It seems so to me, most often, but it's just the way of things. People get old. It's not a bad thing. In many ways one might wish to be born old and live longer. One might learn that too late.

Politics be damned. Obama is doing nothing while Syrians are being slaughtered on the streets. Where are the leftard scums who demonstrate for "peace" in the Middle East? They don't care about peace or Arabs or Muslims or much of anything but their own vanities, their own poses in front of friends at demonstrations, about looking cool and saying the right things to impress each other. I know parts of Syria fairly well, and I know some Syrians. I don't much like the place or the people, but I am sure as hell not going to stay silent while people are being indiscriminately murdered by the government. This is what Jew-hating leftards support:

This video was shot on Saturday April 23, 2011, in the Zabaltani area. Crowds are moving forward knowing full well they will be killed. As they chant “Eed Wahde!” (One hand, or all together), a heavy burst of fire erupts. Many duck or fall to the ground but many remain standing waving their hands as if welcoming death. An unbelievable sight. Then we see people dragging those up front and one lands next to the cameraman with his head open. This may have been caused by a direct shot to the face that exited the back causing this damage. Not for the faint of heart.

We want the American people, with this video, to understand what the unarmed young people of Syria demanding freedom are up against. We will never stop until we get our freedom. By sharing with you these horrors, Syrians are not asking for boots on the grounds, or even military action of any kind. But we are asking for your support to mobilize policy makers in the U.S. to condemn Assad and to put him, and his killers, up for trial in a court of international law for crimes against humanity.

Lifted from Pajamas Media. They have numerous videos and commentary. Keep this in mind next time some leftard tells you about genocide in Palestine. This is the real thing.
Posted by Dag at 12:29 AM 5 comments: