A Type of Beauty

Life can sometimes be terribly cruel, as we see from the biography of Cervantes, as an example: Muslims cut off one of his hands. He went on to write Don Quixote, true, but had he been left with both hands, he might have written two books. Yes, life is sometimes cruel. I hope, though, that your life will improve noticeably soon. To achieve that I recently got two things to improve my writing and your life: I got from a graduand at a local college a cap I can wear so I can write far smarter copy; and I got a beautiful typewriter so I will write more beautiful prose, finer poetry, and even more famouser headlines. I look very smart in my new cap, but the typewriter is a thing of real beauty. Below is a bit about it and its parents.

E.B. Hess co-founded The Royal Typewriter Company, in Brooklyn, New York, and moved it to Hartford, Connecticut in 1908, according to the Federal Writer's Project (Connecticut. By Federal Writers' Project. Published by US History Publishers, 1938.) 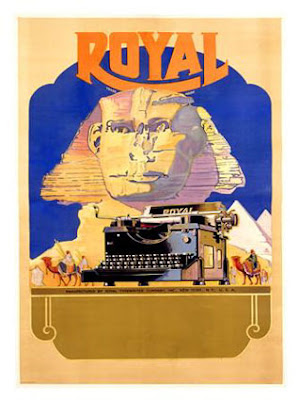 The Royal typewriter entered the market in 1906. It would grow to be one of the leading brands that would dominate the market together with the Underwood and the Remington. That alone should be enough to earn a place in a museum.

[I]n 1914 the upright Royal 10 appeared... the classic model with beveled glass sides that would grow to be one of the market leaders. 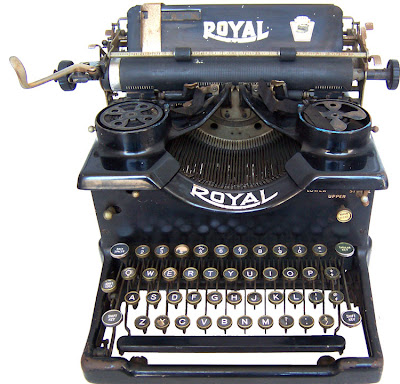 The Royal 10 is another giant in the typewriter market. Like the Underwood 5 it is one of the machines that essentially marked the end of the history of typewriter development. Machines like the Royal 10 continued to be built for many decades, with most changes limited to cosmetic alterations.

The Royal 10 was introduced in 1914. It had two bevelled glass panels on either side of the machine. A later version only had one glass panel on either side. It is not clear at what point exactly that change was made.... 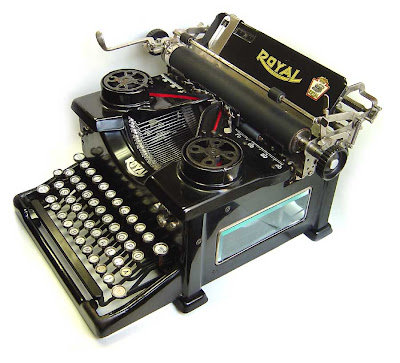 Yes, dear reader, it's a poor workman who blames his tools. I gave that up and simply bought a new machine. I think you must be deeply impressed already. I know I am. Funny how life can be. I used to type with two fingers, but I quickly ran out of two letter words, which forced me to learn to type with four fingers. That got me into lots of trouble, I know not why. But now, with five fingers, I can type all sorts of cool words. This new typewriter also ensures that I'll write beautifully. On the other hand, there are five more fingers! Life is good.

As a courtesy to you, dear reader, a blurb below on a typewriter history book. This has to be one of the most expensive 124 page books on typewriters in history. I haven't read it: http://www.lulu.com/content/paperback-book/the-typewriter-sketchbook/1370470


A collection of richly illustrated articles relating to the early history of the typewriter (1870-1920). With biographies of great American inventors like James B. Hammond, Frank Lambert (who also invented a water meter and talking clock) and Louis Cantelo. Pictorial chapters on the history of office work, related to 19th Century mechanization. The book provides many hours of happy browsing and a wealth of information relating to the earliest days of the typewriter and the rise of women in the office. Some articles were previously published in the Virtual Typewriter Journal (2004-2006). Re-published after editing and with more photos.

The following two links come to us via Glenn Reynolds, known and loved as InstaPundit, the creator Star Trek. You have fans the world over, Mr. Reynolds, and I am one.