A late night television comedian refers to our president, to his face, as "Dude." That's "dooo-oood." No, I'm no fan of the vile weasel Obama, but I have some respect for our presidency, which must be why I'm not a comedian on late night t.v.

"Yo, bro, I see you're hitting the links again. Eighteen youtubes in one day, man, is a full labour. Chill a bit."

Well, look, dude, I'm concerned about the nation and how things are going with us, like with you leading us. We're being creamed world-wide. You got a plan?

Yeah, man, it's cool. I was on the Daily Show. His ratings were way high, but mine are going to be just as good as his. I swapped teleprompters with Stewart. It' my "Domestic Policy."

Man, the golf courses in Kansas really suck, so I ain't got one.

Yell "Fire!" in a crowded theatre

I ran into a friend this afternoon and he invited me to a movie. I looked at the poster and told him I'm not shelling out $2.75 for something like that. Uh, seems like I haven't been to the cinema for a while.

"An intense emotional roller-coaster ride of a movie...."

Huh? What is that? Either the good guys kills all the bad guys, blows up their stuff, and leaves everything burning at the end, or it's a dud. How much emotion does that require? 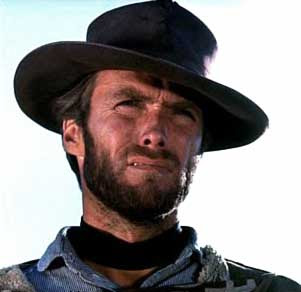 Me, I'm like keen on Clint, especially when he said, "I feel your pain, punk. I like it. I want you to have some more." Now, that's a movie. Kee-ryst! If I want emotion, I'll get a dog and call him Ingmar Berdog.
Posted by Dag at 6:01 PM 4 comments:

Will we make it past the 50 seat number? The suspense is killing me. And we won't know till the fat man sings. 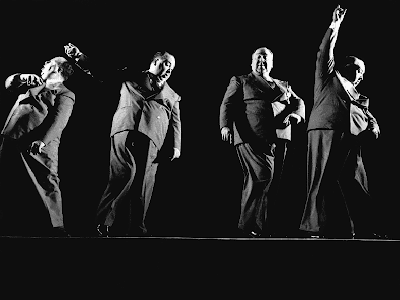 Feel free to make Hitchcock puns. Anything to take up the time productively till we can begin the long process of restoring America to the decent nation it is and is supposed to be.
Posted by Dag at 11:05 PM No comments:

A commentator at Belmont Club left a casual line some long time ago, "Think Globo, Act Loco." I loved it at first sight, and since then I've used it with each email I send, and I have it as the logo at my blog, No Dhimmitude. Today I find that someone on FOXNews used the same line on television. I am pleased for the anonymous person who came up with it, and wish I had done so myself.

The point here is that though I and we often write to few and find ourselves ignored in great part, there is the trickle that leads to the flood. Someone saw my logo and now it's on FOXNews, in the minds of millions.

We are looking at a restoration of our nation as the free and open place it has been and is intended to be, America. In less than a week now we might just see an end of the reign of hippies we've patiently endured for decades. 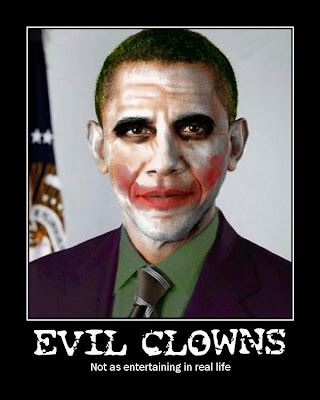 These evil clowns are about ready to melt down to their over-sized booties.

There's an old saw in the journalism business that the strongest urge a man has is not for sex, love, power, or else, but it is to rewrite someone else's copy. The strongest urge a man has is to tell another man how to live his life. For many, that is the sum of their religious life, which for some is life itself. Look at the religious fanatic, and see that he is determined to tell everyone on earth how to live-- or else go to Hell. That's just fine so long as the proclaimer is some goof shouting on the sidewalk. but when it's close to half the population and a good part of the nation's civil service and public employees, damned near all of the "elite' and our politicians, then it goes beyond annoying to the point it becomes a matter of serious need for "climate change."

So far, we have a right to vote out the religious fanatics who demand that we repent and follow their plans for a perfect world even if it kills us. Woe to those who publicly disagree with the religious fanatics, but we can once in a while secretly vote against them in elections. We can do that in less than a week. If, as looks likely, the evil clowns posing as our saviours and the saviours of the world lose their positions of power in politics, we must expect them to act in character, flying into frenzies of hatred and hurling abuse at those sinners who refuse to live the way they would demand we do. Some will even be upset that the religious fanatics are scolding. Some will take it personally and think the fools have a point and that they might be ashamed of tossing the evil clowns out of power. Some will be hurt that these moralistic teenage religious fanatics are upset at being contradicted and even tossed out of the game.

But there's a fair chance that the nation's people are finally fed up with the antics of clownish children making absurd demands that the world abide by their fantasies. Who cares what these teenage fools think, any more than we would care about the equally clownish street preachers screaming on the sidewalk.

The world is going to end if we don't obey the demands of street-preaching children? Well, nice knowing ya. And for me that's the end of this story.

Bringing an appetite to the cannibal banquet

We'll know something about the direction of the Modern world in a week from now, a something that might tell us if we are committed to continuing the pursuit of individualism or if we are lapsing into communitarianism, the usual and seeming natural state of humanness. Will individualism triumph in the up-coming election on Tuesday, or will we slip into the comfort of the eternal fasces of sadism? Who will stand and who will fall? 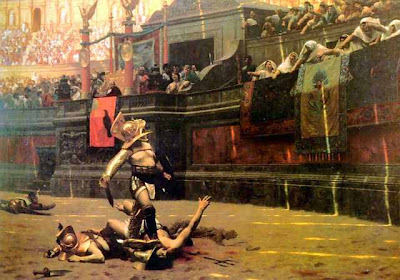 Politics is something of a spectator sport, a blood sport, and a nasty game, a dirty one, in which power meets power, and lives are made or lost according to the whims of the masses. Tatian, an early Christian philosopher, calls it all "The cannibal banquet of the soul." 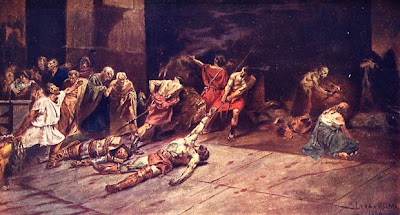 Well, we have to eat.

Lauren Wilkes Booth converts to Islam. No, I don't have a gun.

British ex-prime minister Tony Blair's sister-in-law, Lauren Booth, has become a Muslim. She's reading the Qur'an. She's on page 60 already. As Albert Camus points out about Communists, "First they convert, then they learn the dogma." If this genius had become a Communist, she might have realised that religion is the opiate of the people. Oh, wait, she knows that.

I know a fair number of Communists in this city, and when I run into them on the street I always ask if they've converted to Islam yet. None so far, but it's a matter of time till they all convert. It's the new wave for stupid people who like to think of themselves as intellectuals, for group-think parasites who want to be part of the "in crowd," for anti-social types who want to be part of a gang. It's a comfortable identity for the lost and stupid. I would suggest Nirvana instead.

Tony Blair’s sister-in-law has converted to Islam after having a ‘holy experience’ in Iran.

Broadcaster and journalist Lauren Booth, 43 - Cherie Blair’s half-sister - said she now wears a hijab head covering whenever she leaves her home, prays five times a day and visits her local mosque ‘when I can’.

She decided to become a Muslim six weeks ago after visiting the shrine of Fatima al-Masumeh in the city of Qom.

‘It was a Tuesday evening and I sat down and felt this shot of spiritual morphine....

Read more: http://www.dailymail.co.uk/news/article-1323278/Tony-Blairs-sister-law-Lauren-Booth-converts-Islam-holy-experience-Iran.html#comments#ixzz13RN0Qf8Q
This idiot, like most idiots who convert to Islam and those who stand on the side-lines cheering Islam just like straight women gush about their gay friends, want to be seen as cool people who know things more fully than those they fear, i.e. the normal and well-adjusted individuals who struggle through a difficult existence as well as possible, sometimes successfully in spite of all the hardship that life entails. For the fearful, for those who are afraid of themselves as empty beings with no quality, there is the group to fill them.

Ed West at The Telegraph writes,

[I]slam is, unlike any other faith, more than just a religion – it is also a political idea. And ever since the decline of socialism and Left-wing intellectuals’ abandonment of the working class, third worldist “anti-imperialism” has become the radical chic of choice, especially so with the Holy Land conflict. And what better way of embracing the politics of the 1968 generation than by submitting to Islam?

I like Kurt Cobain. No, I don't have a gun. Booth can visit me any time. I'll suggest Nirvana.