Someone must like me. I got a beautiful greeting that I wish to share with you in the same spirit. 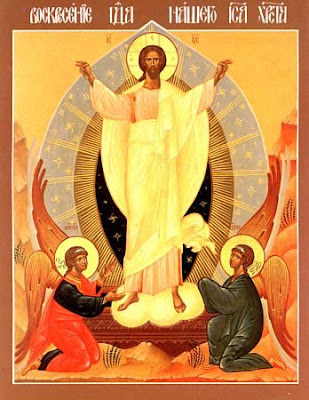 "Christ is Risen! He is Risen Indeed!"

There are some guys who just cry out for a game of football. Everything about them says, "I want to play and I want to win." To be honest, I like it. I want to play, too. I want to get the guy on the field and get into it full-blast. The guy, the Palestinian in the white tee-shirt and blue jeans in the video below. He can be on the other side, I don't care. I really want to play. I love full-contact sports, and this guy is no metro-sexual. Man-to-man, I want to meet him and try it out.

But he's likely a sissy after all. He looks fairly fit for a fellow his age, and he's cocky enough. But I fear that if it comes to it, he'd probably run away because he's born to cry. It's his nature to fight, but I fear that's been drummed out of him over the course of his years. He's got what it takes to fight, but I think he'll never let himself get to that point, always strutting and bragging, and then backing away when it gets to the flash-point. Too bad, 'cause some guys should be on the field where they belong.

I've seen it many times, that guys Muslim will shout like monkeys and rage like dogs on a chain-- and that's about it. They either act as a mob, no individual action to speak of; or they act individually only by sneaking, afraid to act openly as individuals for fear of offending the Muslim collective. Not so of Iranians, often enough. I've known some first-rate boxers from Iran. They'll stand man-to-man and fight. But I've only encountered one Palestinian who ever did that. Too bad. Mostly they just strut and make noises: "The Jews need another Holocaust." Uh huh.

Too many nuts in the House will make it tip over

Rep. Hank Johnson (D-Ga.) is afraid that the U.S. Territory of Guam is going to "tip over and capsize" due to overpopulation.

Johnson expressed his worries during a House Armed Services Committee hearing on the defense budget Friday.

Addressing Adm. Robert Willard, who commands the Navy's Pacific Fleet, Johnson made a tippy motion with his hands and said sternly, "My fear is that the whole island will become so overly populated that it will tip over and capsize."

Willard paused and said: "We don't anticipate that."

[Excerpt] Throughout his first term, Hank distinguished himself as a thoughtful legislator who advocates for the concerns of his constituents and citizens across the nation. He vocally opposed the Bush Administration's Wall Street bailout. He voted to raise the minimum wage. He fought for children’s health insurance, more Head Start funding, and to reform “No Child Left Behind.” He secured Federal funds for transportation, for medical facilities -- including Grady Hospital, and for public safety in the District.

Hank also writes (wrote for) The Hill. See link above. But I might well have two similar things confused here. Please let me know.

Johnson was the first Congressional candidate invited to blog for The Hill's Congress Blog, typically reserved for Members of Congress.[12] "I'm tremendously excited about the opportunity to use this unique medium to strengthen democracy by increasing open interaction between constituents and candidates."

Now, I know you're going to ask just who else writes for The Hill. Here's a list of Johnson's fellow Hill writers, some of whom you might recognize, like the fellow who runs The Daily Kos. Wonder why they'd post a video like the one above of a man they must know personally?

I'm willing to accept that Hank Johnson is one sick fellow and in need of a hospital. The question is why, if he is so sick, no one in the Democratic Party has seen to it that he's hospitalized rather than making outrageously funny comments in the House. The guy is either sick and needs a hospital, (says Dr. Dag,) or he's barking loony and shouldn't be in the House at all. So why is he there? Did Obama really need his vote on Obamacare? Is this democracy? Or is this just a dirty game played by cynics?
Posted by Dag at 11:54 PM 3 comments:

"O generation of vipers, how can ye, being evil, speak good things? for out of the abundance of the heart the mouth speaketh."
Matthew 12: 34, King James Bible

The laudatory bullshit one reads regarding Obama is enough to make a sensible man sick. Take, for example, Newsweek editor Evan Thomas, who claimed that Obama is a sort of god. Thomas, grandson of six-time Socialist Party presidential candidate Norman Thomas, said on MSNBC's Hardball with Chris Matthews:

"I mean in a way Obama’s standing above the country, above – above the world, he’s sort of God."
Read more: http://newsbusters.org/blogs/kyle-drennen/2009/06/05/newsweek-s-evan-thomas-obama-sort-god#ixzz0joNXVNBy
Let's look for a moment at something Thomas seems not to understand:

"We hold these truths to be self-evident, that all men are created equal...."

Evan Thomas seems to miss the point of our nation: that all men are born as equal in their rights. It means that no man, just because he was born to a title, is more equal than a man who is not born to a title. Even if a man is born as "King" he is the equal of any man not so born. And in our nation, no man is "entitled" by birth of himself. One might be born with a title, but then it's all up to the baby to grow up to do as he can. Titles don't entitle a man. Ours is a free country because no one is bound by his birth to be other than what he is by nature. Too many Americans just don't get it: We are free people because we are free to be ourselves. No man is a sort of god. Every man is just man. Every man is as naturally equal as any other, no god bullshit about it. We all have the same natural rights, no divine right of kings, no gods involved.

Thomas probably doesn't mean Obama is a spiritual god, but a temporal "heroic" man, a super man, ubermensch, as it were. Obama is (superlative.)

There are those who look on the world comprising Gods and Monsters. To some, some men are not born equal in natural rights as men; some men are gods and some are monsters. There is Obama. There is Sarah Palin.

The quotation below comes from a newspaper report on an accident involving a car driver and pedestrians.

"She's always preaching to me, 'Mom, do this,'" Wain said of her daughter, who she said suffers from bipolar disorder. "She's always helping people. She's always telling people what to do. She's intelligent."

A bipolar women bullying her idiot mother. Daughter is considered "smart" because she "preaches" and "helps people," tells them what to do: is "intelligent." That seems to be what the communalist deems "smart" to be. Obama, a sort of god who bullies the nation, is "smart." Those who don't like such things: "feeble-minded," or the modern equivalent.

There is an interesting chapter in American history, in English history to a lesser extent, and in German history to an overwhelming extent, concerning "feeble-minded" people. That chapter, the Englishman Francis Galton's concoction of the pseudo-science we know of as Eugneics, the ridding of the world of the feeble-minded. Eugenics was taken up by American pseudo-scientists in a large way in the early part of the 20th century, and it was imported and adapted further by Germans, especially in the 1930s and 40s. The world, then, was made of Gods and Monsters.

Today, when the likes of Sarah Palin are "fascists"?

This is what a young person writes today:

"I just realised that at the time, Marie Antoinette's actions lead to her own execution. If we treated political figures the same way as French did then, Sarah Palin would have been killed by now. Oh, those were the days."

It takes an extraordinary hubris to write such a line. One must be a god to do so. Only he who knows all of the universe and life itself can find it in his own mind to pass judgement on people who are "lesser" to the point of condemning them to death. It's a Eugenic project, this condemnation unto death of the "stupid." Only a god would so presume.

Among the symptoms of Gnostic dementia, Voegelin remarked pathological alienation from the world, as it is given to us; he also remarked that this alienation easily tips over into outright destructive hatred. The Gnostic sees reality as tyrannical and intolerable because God or some power has brought reality about, endowing it with the character that it possesses, without consulting the Gnostic. The Gnostic is someone – he might even be atheist, as most self-identifying modern people and most Left-liberals are – who in effect resents the fact that he is not God and who wishes to become or to replace God, or whatever the power is that has led to the present constitution of reality. In nominating himself as the replacement-deity, the Gnostic strives to demonstrate his god-equivalence by remaking or transforming existence. He wishes to be absolutely sovereign and will tolerate no competitor or rival. Destroying longstanding traditions and replacing them by synthetic abstractions belong to this project, as the histories of the ideological dictatorships will reveal.

If you've ever asked yourself how Germans could have become the most evil people in history, i.e. that they embraced Nazi-ism, you have probably concluded, as I do, that Germans never for a moment considered themselves or their programme to be anything other than perfectly good. They must have seen themselves as so good as to be nearly perfect, and their leader as a sort of god. Yes, the German people saw themselves as the master race, the smart people, the elite, the best of the best. And then? Well, then they decided to improve upon the works of god and nature by selecting for good breeding the smart rather than the stupid, helping nature by ridding it of nature's mistakes. How could making the human world better be wrong? How could ridding the world of stupid people be anything but a benefit to humanity? Eugenic. The good and the living. Let the good live so they can triumph, while ridding the world of weeds, of those not fit for life.

Who decides? He who must be some sort of god, his law-givers a generation of vipers.
Posted by Dag at 8:45 PM 2 comments:

He see's 'em ever where. That Charles Johnson is dynamite.

Charles Johnson of Little Green Footballs, a formerly popular blogger who used to deal with issues of jihad, has in later years gone off his head in a serious way, defaming many and sundry as "neo-nazis," among other ridiculous things. In a moment of forgetfulness of the nation I'm in, I proposed at a popular Canadian blog Charles Johnson as the fool of the year, meant to have Canadian nominees, of course, and yet-- Charles Johnson won! Even Canadians voting on Canadians had a low opinion on Charles Johnson. Here's the sort of reason why, as an example: Johnson slags anyone he can find, it seems, which works for a short time till it becomes a pattern that we see eventually as one of madness.

The flag that Charles Johnson is upset about, the one that he thinks, fairly sure, is a neo-nazi flag? Its shown at a Tea Party rally: 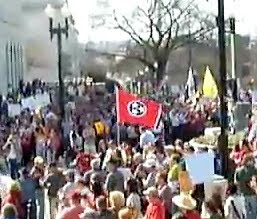 Well, who can say but Charles Johnson? Seems lots of folks can say. 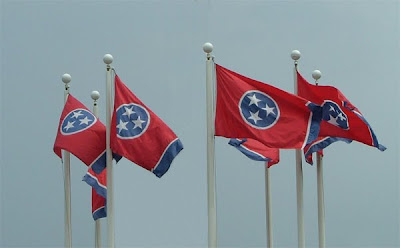 It's the state flag of Tennessee.