English literature has a long tradition of fable, allegory, and, perhaps most English of all genres, the roman a clef, the novel of historical characters presented as fictional, ranging from Everyman, c. late 15th century, and John Bunyan's Pilgrim's Progress, (1678), to that well-know work by Aldous Huxley, Brave New World. Recently, Vancouver writer Jonathon Narvey has added to the canon with his novel, A History of the Middle Eastside.

European and Middle Eastern history is presented in novel form in Narvey's work, beginning with what I take to be the Dreyfuss Affair of 1894, as witnessed by Theodore Herzl, founder of Zionism. Moving through the novel's presentation of events set in fictional Manhattan gangwars, we see tough guy Gruber, (known to us not as Adolph Schicklegruber but as Adolph Hitler,) defeated; his rivals François, Big Ben, and Ivan, with the dedicated help of Washington, then vying for turf; Polanski, (whom I take to be Ze'ev Jabotinsky,) a refugee from the wars, showing up in the traditional Jewish ghetto of Manhattan's Lower Eastside, here as The Middle Eastside, 1948. Thus begin the gangwars of survival "The Yids" must win-- over and over again. Even over a century later, the wars wound down, a celebration in full swing, the war comes to the homes of "The Yids." There is no end to the wars. Such is not fiction.

In the Morality Play of Everyman, the main character is a happy fellow beckoned by Death. Everyman's companions in life cheer and offer to go with him on this last journey: Good-looks, Fame, Fortune, & c. "Everyman, I will go with thee," each exclaims; and then, one by one, they fall away, leaving Everyman to accompany Death alone, but for one who remains. In Narvey's work, death comes to "The Yids" in the midst of hope, and he who remains standing is The Fighting Jew. It comes to mind: "Everyjooo, I will go with thee."

This pilgrim's progress to a brave new world is not so much different from any other moral tale of the gangs who struggle. The trick of it all is to join the right team and struggle for The Good rather than to follow the local leader into crime. Can one transcend ones vanity and see beyond the local hatreds and opportunities for easy gain at the expense of others? Can one rise above the turf wars and the gangleader's charisma? Mostly, probably no. The wars will continue because man is always man, and place is always place. If we fight the gangs, does it make us as bad as they are? One might hope that ones Vanity will not follow one to the grave. Good Deeds? I ain't counting on it. But some few will follow Everyjooos just because it's right. Is it a Good Deed? I don't think so. I think it is instead just The Good. To my unsophisticated mind, it matters not a bit the quality of the man who does The Good. It's not about the man, no more than Narvey's books is about gangsters in Manhattan. 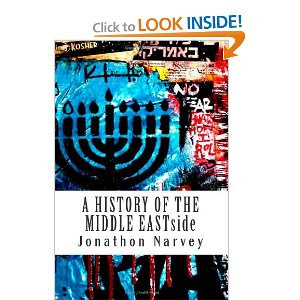 Narvey's book is 250 pages of what should be light reading, an amusing account of a terrible story of Man. It's an evening's light reading except that those of us who get hung up on the story beyond the story don't find any of this amusing. Even a roman a clef presented with a wry humour and a deft fictional touch is enough for some to become enraged in the reading. For the more sober-minded reader, it's light and fun. Narvey's Yiddishisms tossed into the dialogue evoke afternoons of childhood spent watching strange old men talking to each other in English that makes no sense, mother suddenly clutching ones small arm and hauling away the boy, admonishing, "Those are the Jooos." It should be funny. But there are among us some who know, even from too young an age, that right is right and evil is hatred and murder. Any twelve year old should be able to sort fact from fiction, but when fact is fictionalised, this eleven year old has trouble with it.

As a professional reader, if not a particularly serious academic, I read critically and objectively. Sometimes. As a literary critic there is much I could write about Narvey's novel. The question of import for you, dear reader, is whether you would find your time well spent reading A History of the Middle Eastside. I think, "Yeah," most people will find this fun and interesting. Narvey writes well, and the dialogue is catchy enough to keep one interested in a story one might not know the whole of in depth in advance of. For most other casual readers this book is fun in itself, as coherent as anachronisms allow. This is not a book for those poor creatures who would spend a day, a week, a month, even a lifetime tearing apart libraries in search of that one obscure and elusive detail. It's a light read. It's not for the morbidly obsessed. I think "normal" people will enjoy this.

I think, too, that I'm going to sit at Max's Deli and position this book on the table in such a way that I casually show off the cover to those sitting nearby. I tried something similar with Jonah Goldberg's Liberal Fascism, placing the book carefully so the babes would see it and know they should be all over me. That was a bomb, sorry to say. I've never seen so many women with such steely self-control. Each babe who passed by somehow resisted me and the book. I'm thinking folks at Max's Deli will be a lot more open. We can talk about this Vancouver writer, Jonathon Narvey, and his new novel. I'll sit with The Jooos in some state of minor blessedness and have coffee and cheese blintzes and be happy I have a place in such a world as this. Death will come, maybe not so soon, and when it does, off I'll go. My guess is I'll go alone. Till then, I hope to hang around and continue to make friends and enjoy their company. We can talk Narvey. For now, I gotta go.

The Jooos? Everyjooos, I will go with thee. I hope I can take a book along for the trip.

A History of the Middle Eastside.

Canadian blogger Blazing Cat Fur posted a link to this review and headlined it with an improvisation from a supposed line by the Jewish-American movie star, Tony Curtis, in his 1952 Son of Ali Baba: "Yonda lies da castle of my fadda-- da Caliph."