Even as words evolve over the course of centuries or even over the course of thousands of years they often retain within some part of their original meanings. It is that way with the words "politics" and "idiots." One who is politic is a citizen of a polis, a city. One who is outside the community, who is private, who has no mind that extends beyond himself, is idiote.

Eric Hoffer writes in The True Believer that if one has no business of ones own, one is very likely to mind your business instead. That too is idiotic, that minder mindedness. A responsible citizen, I think, is one who manages a personal balance between privacy and publicity. We all have not just the right to express ourselves in public regarding public policies, we have some responsibility to do so. Even if we don't care to, we must have some responsibility to inform our fellows of our stupid ideas so they have more to work with than if we remain silent. We have a duty to contribute to the intellectual commonwealth of our communities. I think.

Public participation probably doesn't have to be very much. It might be a matter of sitting at a town hall meeting and nodding and smiling. It might be a matter of expressing an opinion on the bus. I think it must be public to be meaningful. I think that involving oneself in another's personal affairs misses the point. That's mostly offensive. But to involve oneself in the affairs of ones greater community seems to be the voice of genius. I don't think it matters much how intelligent ones contribution to the debate is.

We meet each Thursday evening at the Vancouver Public Library in the atrium from 7-9:pm to discuss our public affairs. Join us, citizen.
Posted by Dag at 11:03 PM No comments:

I dined out this evening with Jane. I heard nightmare tales of the lower east side of Vancover, Canada, of the poverty pimps who have destroyed the lives of countless people in their efforts to improve things, to make Heaven on Earth, and of the cynical ploys the poverty pimps use to enrich themselves at the expense of the tax-payers and at the cost of the lives of the poor.

Plato calls these people Philosopher Kings; Eric Voegelin calls them gnostics; Sowell refers to them as the anointed; a local media man calls them "higher purpose people." Jane calls them poverty pimps. I refer to them as Left Dhimmi Fascists. Whatever we call them they are the same actors, the same dangerous and murderous people who have from time beginning caused harm and death to the unwary. It's time we rid ourselves of their influence in our societies.

We here in Vancouver are busy reading the works of Thomas Sowell. We hope to have others who are familiar with or curious about Sowell's works join us on thursday evening at Vancouver Public Library in the atrium for our regular Thursday evening meetings so we can discuss Sowell's writing and ideas, and perhaps we can formulate some plans to restore our societies to a more realistic state of affairs. We'll be at VPL from 7-9:00 pm.

If Schiller had any sense he would have just written in english in the first place: "Against stupidity even the Gods are helpless."

Let's get rid of the Left dhimmi fascists, end what Sowell calls our self-inflicted wounds.
Posted by Dag at 12:07 AM 6 comments:

Sometime this afternoon I expect to find enough time to finish reading thomas Sowell, The Vision of the Anointed. What a pleasure it has been to read Sowell's work. Ideas that I've struggled with for years to articulate from intuition and experience are plainly laid out by a sharp and funny writer. Until I met Truepeers and Charles I thought I was alone in the world with my ideas. Now I add Sowell to my group of mentors. This great awakening comes about due to our weekly Thursday evening meetings at the Vancouver Public Library in the atrium from 7-9:00 pm. You might well have much to contribute, too. If you can't join us here in Vancouver, then meet others in your area to discuss Sowell together. 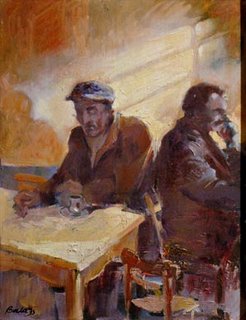 I had a buddy on the road who said: "I don't travel to meet the locals, they're all peasants; I travel to meet other travellers, people who've been around and who know things and do things."

Is there a point to our vacuuous modern Western lives? God-obsessed flagellants living in terror of going to Hell 1000 years ago in the midst of the plague might well have been happier and better adjusted to their societies and their personal lives than many people living today in suburban America. The neurotic self-obsessions of the High Middle Ages had to have been more satisfying than ours today. They must have had it made, no pollution, no urban blight, no slums, no multinational oil companies making them go to war for no reason other than to allow the rich to get richer. And then there was the organic food they ate, natural spring water, sharing and caring communities. It's all a matter of emphasis, like the fellow who explained to me that Hitler wasn't such a bad guy, Hitler just had a lousy foreign policy. I've been so judgemental all these years. I'm not getting the hang of this relativist thing. In fact, I seem to be getting less accepting of craziness all the time. I really want to hang out with Lord Curzon. I don't care if I'm a maladjusted bigot duped by the 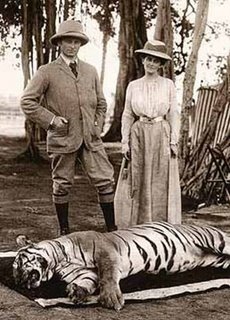 capitalist system and so on. Curzon is my kind of guy. I'm just not keen on self-flagellation and the certainties of the gnostic Left. I like haughty snobbish English imperialists. I like their foreign policies in particular. I like the attitude. Yeah, I could whip myself and worry myself sick about being offensive so that I became certain that I was actually pleasing to the gods, but I prefer myself as I am. I do like nature and stuff. Some animals make great carpets. And health food? Totally. Curzon and I could hang out and be pals. I can't find any enthusiasm for hanging out with Muslims. Socialists don't even make good carpets. Peasants? No. Curzon? Now there's a guy.

What's the difference between Lord Curzon and Maudidi? Emphasis. Maududi is a neo-feudalist; Curzon is a Modernist. In our Janus-like time we look both ways, to the past and to the future. We have to decide where we will place our faith, and then we need the attitude to carry us in one or the other direction. The peasants of the world have a say in this too. They have to decide for themselves which way they go. Left cultural imperialism leads many of the locals locked in a putrid system that exploits them as terribly as did Belgian colonialism. I say toss out the imperialists and bring in real leaders like Lord Curzon.

The English aren't going to return to restore the Raj. That ship has sailed. The Raj, nevertheless, needs resotoration, not the caliphate. And since the English aren't coming back, it will be up to the locals, the tedious and ignorant and venal creatures we don't much care for , to make their own Raj. Yes, they might be happy in the plague of this, our bifurcating time, or they could be very cool guys like Curzon, not really the happiest guy in history.

Peasants in Europe were likely happier 1,000 years ago than they are today. Muslims today are likely happier than most Westerners. I like to think of an unhappy world of peasants all with the attitude of Curzon. I would say, "Colonize thyself, and let's hang out."
Posted by Dag at 8:12 PM No comments:

Too Ugly for Cupcakes

A lady from New York writes to me frequently, and it's always a pleasure to get her letters, many of which concern her life as a suburban housewife. I do like it, especially since I spend so much of my life crawling around in third world hell-holes looking at how things are when things are bad for ordinary people. I like to find normal people living normal lives, those who are honest and decent and who aren't threatened by their governments with murder or worse. When I see infant mortality, which is to write when I see dead children on a daily basis, I see not the hand of captialism and the oil companies at work, I see government out of control. I like seeing mothers with healthy kids who behave socially, meaning not like feral beasts who threaten me, others and themselves. My friend from New York writes about cooking dinner for the family. Stew last night. Her kids won't die from filthy water or rotten meat or from visits from the local despot's death squads. Mom and daughter made cupcakes.

I have another lady who writes to me frequently. She asks if I'm really just a thug. That's hard to answer rightly. I know that because of some of what I do as a traveller I have a look about me that scares some people. All that I do and more would be acceptable and even admirable if I am part of a sytem of legitimate force; but if I'm simply a private citizen who lives and acts in accord with my own vision of right and wrong, then I might only be a thug. Maybe I'm small and 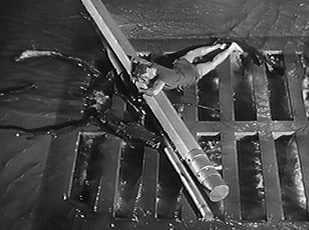 shrinking. Were I a tourist I'd be welcome most places; but if I'm a mercenary, then I might not be welcome anywhere. Who's right and who's wrong? How can we tell the difference? Is it a good thing to decide we cannot tell the difference between right and wrong, and therefore do nothing in the face of what might well be evil? Or should we fall back on ideologies and gnostic insight to determine our vision of right and wrong? Maybe those with less power are right in all cases, victims of power they can't defeat, victims of capitalism, victims of Modernity and greed. I might be a thug for relying on common sense, intuition, and life experience. No doubt that jihadis and Leftists do the same. I so my thug stuff so that it's possible for mothers and daughters to bake cupcakes in the security of their suburban homes. I do my thug stuff so others now living in squalor might someday have the chance to do the same kind of banal things. The ladies who write to me would, if I were to show up at their doorsteps, burst into tears. They would not invite me in. And if you act for the good, then there is a good chance they wouldn't have you in their homes either. There's a price to pay for standing up to monsters. Sometimes you might well come across as a thug. How blessed by life are you to have such a chance! Rejoice that the very people you love for themselves as ordinary won't have you-- 'cause you're too ugly for cupcakes.
Posted by Dag at 7:38 PM 6 comments: