Cat Mother of the Amazon All Stars

Paradise seems to need a serpent in the grass to make it real, like putting a pinch of salt into the sugar recipe to cut the sweetness to something palatable. So it is in Iquitos, paradise indeed, but in need of, and always provided with, a snaky piece of human shit to keep it all honest. That snake is named Marco these days, though he's relatively new to the scene, replacing Vic the Canadian, he having replaced some other arsehole previously, and so on. It's just the way paradise is. Marco, though, has stepped on my toes, and needed or not, the man is not so much tolerable to me. He's a cat-kicker.

I go out in the evenings to sit with the expat crowd at a local cafe. Sometimes my buddy Pedro, a charismatic young Uruguayan comes along to remind us by his presence of our younger days, though for most of us not nearly so dramatic as is the current life of this young fellow with beauty queen girlfriends and others who simply stop and stare at him. Pedro is often oblivious to such things. It's a great part of his substantial charm that he goes through life smiling and happy and unaware of his tremendous impact on young ladies. Pedro is the polar opposite of the scum bag who kicks cats. The two met recently on the street. That's how I became Cat Mother of the Amazon All Stars. 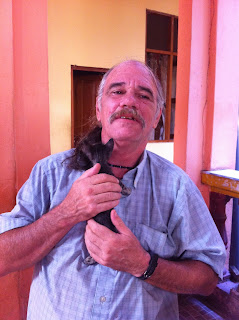 Marco the cat-kicker was across the street from my place one evening as I was out for the day and returning ready to go out to have a soda with my mates. At the time Marco, the scum bag, was torturing a black cat, ripping out hunks of fur from the shrieking little beast. Marco had pulled out a lot of hair from the cat's head and face and was working on the cat's back when the cat got twisted around enough to sink its teeth into Marco's hand. That's when Marco threw the cat across the street and into the stone wall out front of my place. Pedro saw all this and more. Pedro saw Marco pick up two month old tabbies which he threw like baseballs against my wall. Pedro ran out and grabbed the cats and brought them inside and saved them from Marco's further rampage.

When I came home to clean up for the evening with my mates I found two cats, the black one and a little grey one on the courtyard floor of my place. The black cat was a few months old, exhausted and hurt, and the little grey cat was not able to move due to a sore leg and a bruised hip. Pedro told my the story about the cats hurling across the street. I picked up the grey one and slipped him into my shirt pocket and took him with me to the cafe where I sat and kept him warm as I chatted with my buddies. I kept an eye out for Marco.

I returned with the kitten and went to my room and put out some food for the cat. He couldn't walk well enough to get to the dish, so I helped him, and then he could barely eat. An hour later one of the young Peruvians working at my place came to tell me the cat was downstairs shivering. I pointed at the cat and said I was doing all I could. It was then I learned of the third cat, a little brown tabbie. That one had lain unconscious from the impact against the stone wall. I brought him upstairs to my place and laid him next to the other. The grey cat curled up with the little brown one and licked its fur. Soon, both were sound asleep on my bed. When I moved they woke and climbed onto me. I went downstairs, taking them with me. 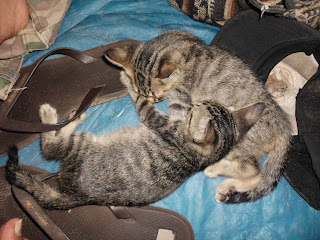 I have better things to do than sleep all the time: I have friends to hang out with. Here is Pedro, my buddy David who drives a motokarro, me, and my friend Adrian Walker, my evil twin. 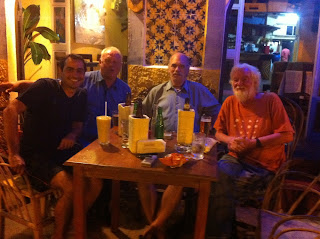 Cat Mother is waiting for Marco.... 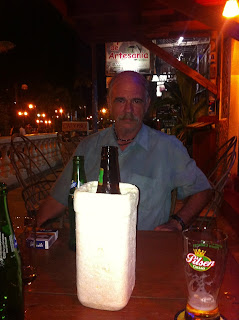 Cat Mother is not amused.

But the kittens are fine.

Iquitos, Peru: Seating Ayahuasca at the Cannibal Banquet of the Soul (5.2)