WASHINGTON (AFP-RE/Press) — Democrat Barack Obama has shown the stunning power of the Internet for political fundraising. Now he is fighting its darker side as a vehicle for "smears" against his bid for the White House.

Pausing from a war of words with Republican John McCain over taxes, the African-American senator Thursday unveiled an interactive website to debunk false rumors peddled by email and right-wing media outlets. 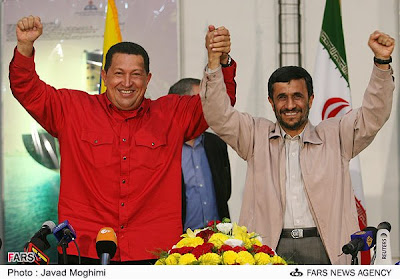 The site at www.fightthesmears.com was created after one recent, and thus-far unfounded, assertion that Obama's wife Michelle had been caught on tape slurring white people.

"We created an interactive tool to allow our supporters to fight back against these smears in the same way that they received them -- on the Internet," campaign spokesman Tommy Vietor said. "And if that's not enough, we send in Rocco and Vinnie to make things right."

"People can upload their address books and easily send fact-based emails to their friends and family," he said.

"Just knowing the truth isn't enough -- you have to proactively tell people the truth to fight back. Bust some chops maybe."

Obama campaign aides said that because of the innate evil of so many non-Obama persons, it was essential to reach out through innovative channels, one of which was hiring Rocco and Vinni to quash rumors before they have a chance to reach the unenlightened.

"I got a guy in South Chi who knows some guys in Brooklyn who did time with a guy who set up a meeting with Rocco and Vinnie for Obama's team. Dese guys are funny. When dey ain't crackin' jokes dey's crackin skulls, ya know? And den dey goes on ta crush testicles. Youch."

The Obama team expects quick results once the new investigative and corrective efforts of Rocco and Vinni become known to the non-Obama public.

"Dese rumas, dey gottsta end, ya know?" said Rocco, a lean and tattooed man of about 30, found conducting business in a back room at Smack Yer Balls pool hall last evening in Bed.Stuy.

Imagine, all this time I though Baraka Banana was hoping to get erected because he's a gasbag with nothing inside. How wrong was I. No need to repeat that. I have mended my ways. I now understand that Osama will quell the tides and heal the Earth. That's right, it's time for Obama Soda, [insert echo], all the fizzle and twice the froth, sugar.

Labels: america in flames, barack obama, end of the world, god help us, we are doomed

More threats, more obnoxious posing, more inane ranting from a sock puppet sent to B.C to do Mohammed Elmasry's dirty work on behalf of stealth jihad. Not very stealthy. More like more of the same. Muslims have it bad? Let's see. How about going for dinner at a Muslim establishment? OK, and once you find Muslims have poisoned you with their own excrement sprinkled liberally on your food, maybe you want to go to a Muslim doctor.
And so on.

I met Dale Carnegie once, and he told me, "Dag, some people just aren't worth befriending." I asked if they were worth beheading. But, you see, I was joking. Seriously, I'd settle for some people just shutting their mouths for the next 100 years or so. I'm not going to get that lucky, though, am I?

TORONTO - Muslims must "demand that right to participate" in national media, Khurrum Awan, the primary witness in the Maclean's magazine hate speech hearing, told a weekend conference of the Canadian Arab Federation.

"And we have to tell them, you know what, if you're not going to allow us to do that, there will be consequences. You will be taken to the human rights commission, you will be taken to the press council, and you know what? If you manage to get rid of the human rights code provisions [on hate speech], we will then take you to the civil courts system. And you know what? Some judge out there might just think that perhaps it's time to have a tort of group defamation, and you might be liable for a few million dollars," he said.

On a discussion panel with Barbara Hall, Chief Commissioner of the Ontario Human Rights Commission, and Haroon Siddiqui, editor emeritus of the Toronto Star, Mr. Awan described his increasingly high-profile struggle "against particular elements in media that are misusing and abusing their responsibility" in writing about Islam.

Under the sponsorship of the Canadian Islamic Congress, and with the help of a small team of fellow recent graduates of Osgoode Hall law school, that struggle has so far involved complaints to the British Columbia, Ontario and federal human rights commissions over an excerpt of Mark Steyn's book America Alone in Maclean's magazine in 2006.

The only case to be heard so far, in B. C, concluded last week with a decision pending.
http://www.nationalpost.com/news/story.html?id=573457

Yeah, yeah, yeah. There's no law against being a total arsehole. If there were, Awan would get life in solitary. And the rest of us could breathe a little bit.

On Ernst Haeckel and the Roots of Left Dhimmi Fascism

Recently my friend and colleague at Covenant Zone, Truepeers used the brilliant phrase: "Ontogeny recapitulates phylogeny." I laughed when I read it. It's sort of true, and it's essential insight if one cares to solve the puzzle of which came first, the chicken or the egg. Peers is an ardent student of Canadian history, a passionate defender of the good aspects of the nation, and perhaps recalled the phrase from Stephen Jay Gould. I wouldn't be at all surprised if Peers came up with it off the top of his head. Then again, the Internet reveals: " Every biology student knows Ernst Haeckel as the originator of the "Biogenetic Law": ontogeny recapitulates phylogeny." Yeah, I knew that. Regardless, it does originate from our old nemesis here, the founder of the 'science' of ecology, Ernst Haeckel. That doesn't detract from the beauty of the phrase, and it does present a chance to reprise Haeckel here.

Not to go on at length about ecology this time round. Not to delve into ecology as the ground of "Blood and Soil" mysticism. No, the point is to leave yet another reference to Haeckel for further points later. I blame Peers for this, he having asked me persistently for a couple of years to define "fascism." Now that I'm around page 200 into it, I have soon to turn my attention to Haeckel again; and I use this opportunity to beg further insights and information from my readers. For those who know little or nothing about the man in question, this short run-down from an amazon book review and a bit of bio. from wikipedia will perhaps start a long and careful look into why we think we think the things we think:

Short review -- get this book. It's only 180 pages or so, but it's an excellent reference book on your shelf the next time some numbskull lazily hurls around the "Nazi" label against any political ideology he or she opposes. Very well documented and researched.

This book describes the origins of National Socialist thought (the "Volk" movement), and its connections to Darwinism, evolution, and nature worship. The author does an excellent job at the connecting the dots between Ernst Haeckel's evolutionary Monism and Hitler's philosophy. This should be read by all, because the evil ideology of National Socialism is irresponsibly misrepresented in pop culture as a capitalistic, Christian enterprise, when nothing could be further from the truth. An excellent companion to "Nazi Economics" by Barkai, another good myth-buster.

It's kind of scary how little people know about the intellectual origins of Nazism, how it's glossed over by professors and "intellectuals" who find that the skeletal backbone of National Socialism hits a little too close to home.

And here, a little less heated, is wikipedia:

Haeckel's political beliefs were influenced by his affinity for the German Romantic movement coupled with his acceptance of a form of Lamarckism. Rather than being a strict Darwinian Haeckel believed that racial characteristics were acquired through interactions with the environment and that phylogeny directly followed ontogeny. He believed the social sciences to be instances of "applied biology". Most of these arguments have been shown to be over-generalizations at best and flatly incorrect at worst in modern biology and social studies.

Haeckel was the first person known to use the term "First World War". Shortly after the start of the war Haeckel wrote:

" There is no doubt that the course and character of the feared "European War"...will become the first world war in the full sense of the word. " Indianapolis Star, September 20, 1914
http://en.wikipedia.org/wiki/Ernst_Haeckel

What, you might ask, has this to do with jihad, with our people murdered by crazed Muslim fanatics who continue to this day to plot to kill and/or enslave the world under the rule of the caliphate? It has much to do with Left dhimmi fascism, with our own people who are our own worst enemies, those who, hating America and our beautiful Modernity, seek to destroy America, hence Modernity itself, and return the world to pristine Nature and man to his prior feudal state as farm animal. We live with assumptions we seldom think of questioning, and here I hope to open up some of those assumptions of things as they are to explore just why they are as we think they are. What is fascism? How can I go on for years here about fascism without defining it properly? I find I cannot go on further without a real and definitive definition after all. Part of the answer is in the works of Haeckel.

I'll continue with this, and other themes related, as time allows.

Meanwhile, if you're in the mood for some fun, click the link to see some pomo musings about fascism. It's by Mark Mcintire, SBCC. Not me. I just liked it enough to post it for passers-by. Not me! I'm not that clever.
Posted by Dag at 11:56 PM No comments: