Heads or Tales? Fifty to One.

The West Van "revert" who used to spin for the Muslims, Khadija Abdul Qahaar, late hostess of Jihad Unspun, the lady also known as Beverly Giesbrecht, is losing her mind. No, not because she became a Muslim after 9-11, but because her whole head will soon be gone from her own self. She's going to be headed for Hell without a hat. The Taliban have her. Only you, dear reader, can save this poor helpless Muslim sympathizer from her up-coming really bad hair day, and you can do so by coughing up a mere two million bucks, which must be in, sorry to say, filthy Yankee lucre. I sent a cheque, but it bounced. Oh well, I did my best.

Heads Up: Jihad Unravelled has this posted:

Khadija Abdul Qahar is a devoted Muslim who created this web site. 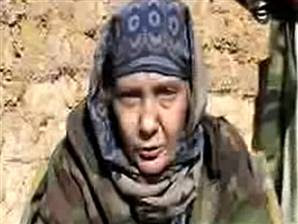 Since 2002 she has operated a totally independent outlet for news about the Middle East.
With almost no resources, this tiny, and soon to be much shorter, woman raised the bar for courageous reporting.
She knew that her integrity would be attacked by both sides.
But Khadija appreciates the kind support from fellow Muslims world-wide.
Her primary goal is independent journalism that provides an alternate voice to Western media.
She was aware of the risks involved in her latest journey, but had faith in those who were supposed to protect her.
Pray to Allah that she will be allowed to continue her efforts.

This site will resume operation upon her release.

Now, now, I hear you saying that's plenty good reason to hope she never comes back from the tomb.

PESHAWAR, Pakistan – "I am Khadija Abdul Qahaar. I am a convert to Islam. I have been advised to make this video. I am going to be killed at anytime." 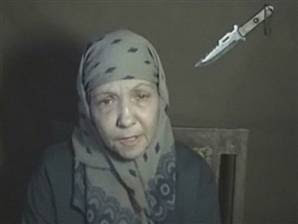 But if you're not interested in that, I am pleased to announce that I bought some nice potatoes and some red onions this evening. I have some broccoli and chicken in the fridge. So, it looks like I'll have a nice dinner. After that I might see if anyone else left a comment at the msnbc link expressing sympathy for the Jihad Unhinged lady. So far, out of 50 comments, someone did. Maybe it was me! 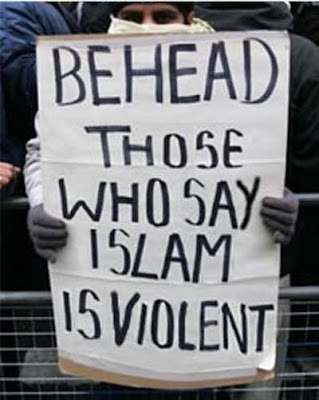 Posted by Dag at 10:16 PM No comments: Links to this post

Anne Holmes Redding sings, "I am flaky, hear me roar."

"I am both Muslim and Christian and Flaky and on the verge of being dumped by the Episcopalian Church."

By Janet I. Tu [with additional help from Dag and the MSM.]

The Rev. Ann Holmes Redding attends the Sunday morning service at St. Clement's of Rome Episcopal Church in Seattle. Redding has been an Episcopal priest for 20 years and a Muslim for 15 months. 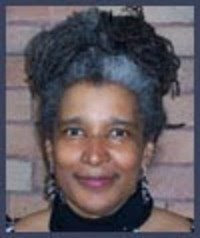 Shortly after noon on Fridays, the Rev. Ann Holmes Redding ties on a black headscarf, preparing to pray with her Muslim group on First Hill.

On Sunday mornings, Redding puts on the white collar of an Episcopal priest.

She does both, she says, because she's Christian and Muslim.

Her announcement has provoked surprise and bewilderment in many, raising an obvious question: How can someone be both a Christian and a Muslim?

PROVIDENCE (AP) — An Episcopal priest in Seattle is fighting attempts by Rhode Island Episcopal Bishop Geralyn Wolf to defrock her for practicing Islam and Christianity at the same time.

Redding, who until recently was director of faith formation at St. Mark's Episcopal Cathedral, has been a priest for more than 20 years. Now she's ready to tell people that, for the last 15 months, she's also been a Muslim — drawn to the faith after an introduction to Islamic prayers left her profoundly moved.

But it has drawn other reactions too. Friends generally say they support her, while religious scholars are mixed: Some say that, depending on how one interprets the tenets of the two faiths, it is, indeed, possible to be both. Others consider the two faiths mutually exclusive.

Wolf has told Redding that her conversion to Islam constitutes an abandonment of the Christian faith and she must recant by March 30 or lose her status as a priest.

Christians and Jews have corrupted their scriptures. (Âl 'Imran 3:74-77, 113) Although Christians believe ‘Isa died on a cross, and Jews claim they killed him, in reality he was not killed or crucified, and those who said he was crucified lied (An-Nisa’ 4:157). ‘Isa did not die, but ascended to Allah. (An-Nisa’ 4:158) On the day of Resurrection ‘Isa himself will be a witness against Jews and Christians for believing in his death. (An-Nisa’ 4:159)

"There are tenets of the faiths that are very, very different," said Kurt Fredrickson, director of the doctor of ministry program at Fuller Theological Seminary in Pasadena, Calif. "The most basic would be: What do you do with Jesus? I mean, other than play cards?"

Christianity has historically regarded Jesus as the son of God and God incarnate, both fully human and fully divine. Muslims, though they regard Jesus as a great prophet, do not see him as divine and do not consider him the son of God. "The word Christian is not a valid word, for there is no religion of Christianity according to Islam," writes Mark Durie at www.answering-christianity.com

"I don't think it's possible" to be both, Fredrickson said, just like "you can't be a Republican and a Democrat and a flake." 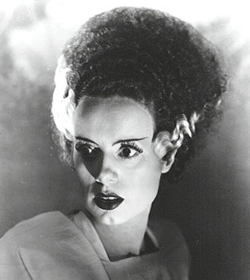 Redding, who will begin teaching the New Testament as a visiting assistant professor at Seattle University this fall, has a different analogy: "I am both Muslim and Christian, just like I'm both an American of African descent and a woman and a flake. I'm 100 percent both of all three."

Redding says, "I am woman, hear me roar."

And to Dr. Mark Durie at http://www.answeringislam.info/Intro/islamic_jesus.html

Or you can just take my word for it that I really improved this story.
Posted by Dag at 10:33 PM 2 comments: Links to this post