Giving Thanks for Pane and Loss 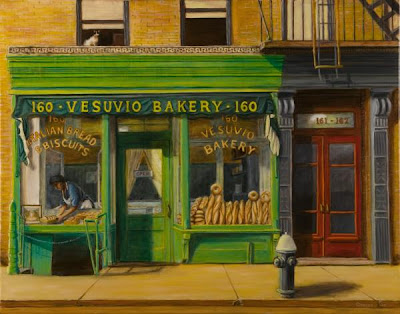 
THE Vesuvio Bakery on Prince Street in SoHo was much adored, even among those who never patronized the venerated establishment. The bakery, with its often-photographed lime green storefront and its rare coal ovens, began producing Italian bread and biscuits in 1920. It was a remnant of a time when many more immigrants from Italy, and far fewer designer shoe shoppers, walked the neighborhood’s cobblestone streets.
For much of the bakery’s life, the business was run by Anthony Dapolito, a beloved neighborhood figure who died in 2003. Mr. Dapolito was born the year his parents opened the bakery, and as a boy, he delivered the bread on a horse-drawn wagon. Later, Mr. Dapolito became a widely known community advocate, and the bakery served as a meeting spot.
“People would go in there, buy a loaf of bread and complain,” said Frank Genovese, the proprietor of Milady’s Bar, another longtime establishment, which is next door to the bakery.
Mr. Dapolito sold the bakery shortly before he died, but the business survived, at least in name. The new owners converted the interior into a cafe and offered items like tiramisu lattes.


http://www.nytimes.com/2009/02/22/nyregion/thecity/22vesu.html
It's gone now. Things change. I'm thankful I was able to eat Vesuvio buns and bread over the years. I remember my grandparents, much loved by all who knew them. Sic Transit Gloria Mundi? Yeah; and it leads to something else: a new world, a world like that of the Pilgrims creating a place for my grandparents and Vesuvio's Bakery and Americans today and tomorrow. I'm thankful for what I've had. I will be thankful for what I get, should I be so lucky again.

"Going Rogue" was released this week and its print run already has been increased from 1.5 million copies to 2.5 million, HarperCollins announced Friday.

From the anals of the HuffPo we find that the Army was afraid that if Palin were to sign books in front of media cameras the voice of the military, i.e. soldiers in general, would possibly upset the brass' working relationship with the Commander in Chief, i.e. Obama: Cheers for Palin, even a quiet turn-out to buy her book, contrasted to the dead silence when Obama gives a "Hope n Change" rodomontade. And maybe we'll see when Sarah Palin shows up on television to sign her book how things really stand as men and women of our military show up and express themselves publicly.

RALEIGH, N.C. — The U.S. Army said Friday it would open Sarah Palin's appearance on Fort Bragg to media, a reversal from earlier in the week when the military wanted the event closed out of fears it would prompt political grandstanding against President Barack Obama.

The Army now plans to allow any interested media to cover Palin's appearance, including allowing interviews with people who attend the event and rotating journalists into the building where Palin will be signing books.

McCollum said Thursday officials planned to allow the general public on base but prevent media from attending so the Palin book signing would not become a political platform to express opinions "directed against the commander in chief."

Where have all the cowboys gone?

I think one will find them at Sarah Palin book signings. Cowgirls, too.