Lima has a number of areas easily spotted because of the predominant colour scheme of the buildings. One of the rougher areas of town, the Cerro San Christobal, is seemingly pink. The area we see below is a little brighter. It has a multitude of music and musical instrument shops. Nice area. I bang the drum for the place. 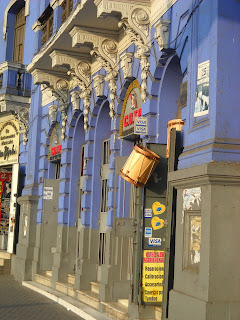 This is in the centre of Lima, though that covers a lot of ground. I couldn't say that asking for the Blue Zone will get you any help, but it's how I know things. I live closer to the Yellow Zone. 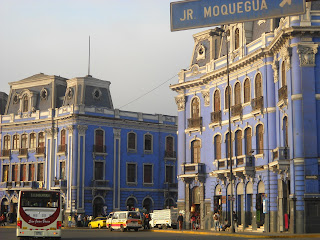 This is not Hollywood or Las Vegas or New York or Miami but it does have its own version of CSI, Lima. 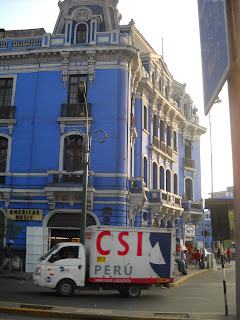 ****
For those who want a quiet place to sit and contemplate, there is a church inside the area, around some corners from the main round-about where one finds the buildings above. Note that the church, like so many places in Lima and Peru generally, is only partly painted. Still, it's a nice place to visit on a sunny late November day in the warmth of summer here. 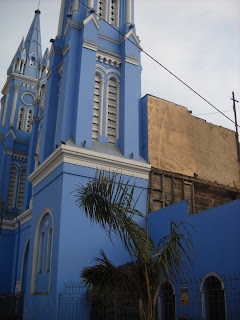 Mostly blue suits me fine. Lima is lovely this time of year.

At the top of the stairs of my hotel there's a sliding metal gate that I tap a coin on to get the girl's attention at the desk so she will come round and let me in when I return from the day's doing and need to go home with my stuff, groceries and so on weighing me down and adding to the desire for a sit down and gaze at the misty sky, often, as I discovered, flecked with a fine dust from the desert that this city sits on. I see mist everywhere, the sky speckled with pigeons and over-sized crows that look like small vultures. As the girl opens the gate I climb in and go to the rooftop to catch the setting sun, not a sunset but a darkness descending on the city. From the rooftop the sliding door sounds rolling in its metal track like a distant roar of a crowd of football fans cheering. Another homecoming.

I pass by the stadium sometimes in the course of my day, but I don't involve myself with local affairs very often. It's not important to me whether the hometown team performs well or otherwise. I'm just passing through, and the team is not my concern.

Today I sat sipping coffee on the rooftop in the milky sunshine at my usual dust covered table and a grey pigeon landed nearby on the wall at the street side, his black wings sporting red polka-dots. That is new to me. A strange looking bird. Ordinary like all pigeons, but odd. The sun set and he flew away. Two cheers as the door opened and closed, and I was left sitting briefly in the coming chill.
Posted by Dag at 4:19 PM No comments:

No Cranes in Lima

I walked yesterday from central Lima to the sea, and having walked the length and breadth of the city, and having seen it from a hilltop at the far edge of the city, I think I can say I have seen it pretty well over-all, I have not see a single construction crane. There seems to be no building going on in the city at this time.

There is no building boom, and no building at all that I can see. Some people do private construction on houses, of course, but there are no office towers, no commercial centres, no massive industrial parks or high-tech centres that I can find a'coming.

Yet, the city is filled with people shopping, buying small things as a rule, but buying nonetheless, having at least enough money for food and shoes and taxi rides from the shops everywhere. Is it all cocaine money settling into the working class wallet? 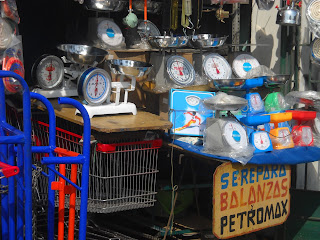 The Peruvian economy grew by more than 4% per year during the period 2002-06, with a stable exchange rate and low inflation. Growth jumped to 9% per year in 2007 and 2008, driven by higher world prices for minerals and metals and the government's aggressive trade liberalization strategies, but then fell to less than 1% in 2009 in the face of the world recession and lower commodity export prices. Growth resumed in 2010 at nearly 8%, due partly to increased exports. Peru's rapid expansion has helped to reduce the national poverty rate by about 15% since 2002, though underemployment remains high; inflation has trended downward in 2009, to below the Central Bank's 1-3% target. Despite Peru's strong macroeconomic performance, overdependence on minerals and metals subjects the economy to fluctuations in world prices, and poor infrastructure precludes the spread of growth to Peru's non-coastal areas. Not all Peruvians therefore have shared in the benefits of growth and despite President GARCIA's pursuit of sound trade and macroeconomic policies, persistent inequality has cost him political support. Nevertheless, he remains committed to Peru's free-trade path. Since 2006, Peru has signed trade deals with the United States, Canada, Singapore, and China, concluded negotiations with the European Union, and begun trade talks with Korea, Japan, and others.

I've been in places where people were starving to death. This is not one of them.

The economy of Peru is classified as upper middle income by the World Bank[10][11] Peru is, as of 2011, one of the world's fastest-growing economies owing to the economic boom experienced during the 2000s... and is the 42nd largest in the world.

This country is not booming economically at the moment, but it is a lovely place to be. On a scale of 1-10, this is a 7 to my mind, below Israel at 9 and above Greece at 6, Mexico at 3, and almost any park in a large city in the United States today at 1.

Yesterday was the first time in a month and a half that I had a guy try to sell me cocaine. He was a Bolivian, and a toothless grifter no matter where from. Compare that to Canada where life is nearly unbearable from all the petty crime, the social interference from leftards, and the miserable climate and Peru beats it by a scale of magnitude.
Posted by Dag at 4:06 PM 2 comments:

If a business in America tried using this Peruvian poster to sell candy I suspect his shop would be destroyed by white college students pretty quick. 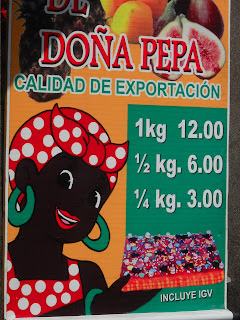 I've spent some time with French folks here, trying to cope with the back and forth of three languages in a strange city while I speak to people from the Caribbean about foreign places we've been to. Speaking a polyglot of words, I want something, but who can say what that would be. In what language?

This evening, on my own, a Peruana approached me and spoke so unexpectedly and so rapidly that I had no time to grasp what she had said. I looked at her and spoke English, at a loss for other, authentic, words. She stared at me in confusion. I told her I don't speak Spanish well and ... "Sigo siendo humano." She understood the words, but she was afraid. I could see it. A man who doesn't speak Spanish here might as well be a stone in a field. And then to speak Spanish, to say "I'm still human" was to strike her as too strange. One must speak the language to make oneself human. One must, and yet I find I can't speak to many these days, meaning my own people. I can speak enough Spanish to get by here, and it comes back daily, as well as what I learn anew. But I cannot understand America any more. I don't know if I will ever go back. There, I'm often enough no humanos. I wanted to do something apart from the group. I took a walk to the church. 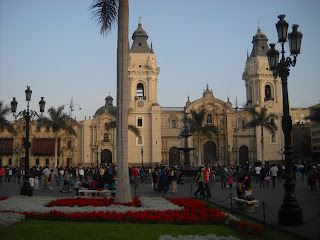 I heard music. I heard a brass band. I saw thousands of people in front of the church, and I stood among them, almost like one of them. 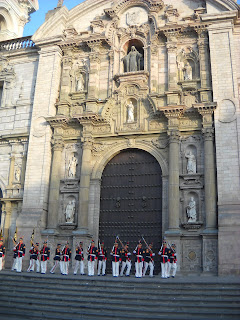 There was a military drill on the church landing. A group of young men drilled in elaborate formations, a team, a group with a single purpose, to be as one. They followed the music of a brass band. 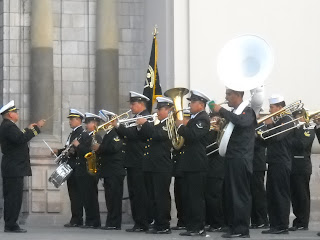 I was swept away by the music and the drill, by the joy of the crowd, few of them, being so young, having had to live through the tough times of repression and violence here. Couples would suddenly and dramatically make out, children would grab their mothers, fathers would stand taller. We all cheered as the drill team did fancy manoeuvres. 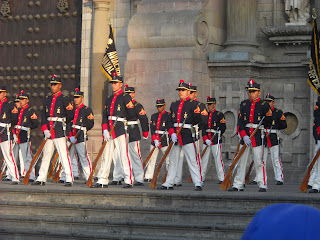 Back home I find that pig hippies living in parks have lice, that they shit on police cars and on bank floors and rape underage girls and homosexuals. I speak the language, but I don't understand what people are saying oft times. 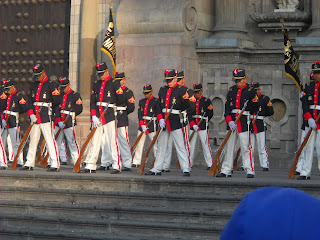 Maybe the Peruvians have trouble understanding my Spanish sometimes, but obviously they were reading my mind. So I thought about how these less than well-off Peruvians live their lives. 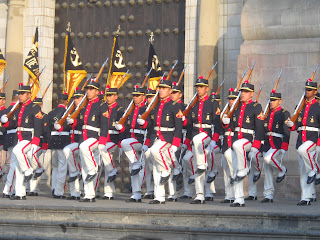 This we can understand. They do not camp out in parks and demand the government forgive the student loans they racked up getting degrees in Angry Victims Studies.

Maybe the Peruvians are crazy. Maybe they should camp out in parks and be pigs. This is what they do instead. 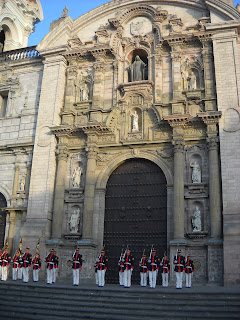 They watch marching men and listen to military bands and go to church, they have children and go to work, just like Americans do, that one percent who don't camp out in filth and demand from others. Sometimes these poor people just go for a walk. 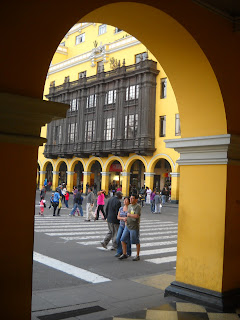 All these languages floating around in my head. I went home for dinner and in the midst of it I heard a band outside my window, thousands of people milling about, the Church again having a procession, and people together for a purpose, whatever it might be. 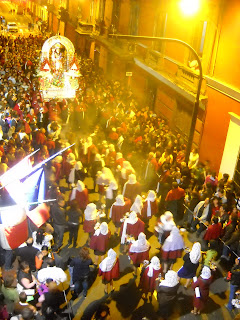 There are some of us who are a band apart. I wonder about it. I like this country, and I fear for the fate of my own. What language makes sense in this confusion. I leaned out the window and I found myself almost yelling out in my finest Spanish: "Kyrie, eleison!"