Chicago blues? Round 'em up. Head 'em out.

I woke from a deep sleep when the gallery across the way opened its doors to discharge a pack of drunken Leftie kids from an "opening" of Palestinian poster art. They shouted in the night, "The Jooos... The Jooos...."

Hi, I'm from the government, and I'm here to help.

Ask for a replay in-flight.
Posted by Dag at 1:13 PM No comments:

Obama is the first truly wired president, the first to have Internet access at his desk and to converse regularly via e-mail. This fingertip access sends him "constantly" online, said one senior adviser, and the information he finds there influences his thinking and some of his deliberations. He also "uses the Internet like a normal adult," said another aide, "reading news articles, checking sports scores." As for what Obama reads online, his advisers said he looks for offbeat blogs and news stories, tracking down firsthand reporting and seeking out writers with opinions about his policies. Obama was particularly interested in Dag Walker's No Dhimmitude.

"I don't think time permits him to be surfing all the time," Axelrod said, adding that the president reads "magazines like crazy," including the New Yorker, the Economist, Sports Illustrated and Rolling Stone. "There are some commentators whose views he's interested in, and he'll read blog items at Covenant Zone."

Now I feel really badly about having blocked all those White House comments. Sorry, Barry. Try again and I promise I'll at least read them before I delete them.
Posted by Dag at 12:28 PM No comments:

The Range of the Cruel

There's a man who works in rural Kansas repairing downed telephone lines. He thinks he should take a vacation soon but there's work still to do, and there's more coming. He'll hold off on the vacation. His work is important, for its own sake, of course, to him, to those who rely on him, unknown though he likely is to those who rely upon him. He's just one guy doing his job, like so many others, all of whom together in some way make our Modernity what it is, good or ill. There's this guy who's a Wichita lineman. He misses his girlfriend when he's out working, but he hears her voice in the hum of the wire.

I think God invented telephone poles and street-lamps just so we can use them to hang Death Hippies. I think of it as an aesthetic action, what we might call "Art." I'm an artsy guy. I'd like to have been an ordinary guy who goes to work maintaining telephone lines, a guy who has a steady girlfriend, a guy who loves someone. But deep down deep I'm really a Leftist. I love the action of "saving the world." In many ways, most of them nasty and cruel, I'm like:

Kathleen Crocetti
I'm an art maker, very social, and being the first born in a large family I am a natural orchestrator too. I'm happiest when orchestrating community arts activities.

The difference between me and her: I like people. I like people who are ordinary folk, who have jobs and families, and who care about the work they do because it gives them personal satisfaction and gives others a better life for it. I'd be a better man if I would tramp through the snow-drifts of a Kansas winter to repair a downed line so folks could call who cares whom. But, damn me anyway, I like the action of saving the world and being a vicious guy who does horrible things to folks. Uh huh. I'm really at heart a Leftist. But I like people, so it makes me an anti-Leftist Leftist. Some folks, uninformed and mostly stupid Leftist sentimentalists, like to call me a fascist. That wouldn't bother me so much if they knew what they meant by the word, which I do and they usually don't. If they knew, then I could correct them by saying, "No, I'm not a fascist. I'm a cowboy." 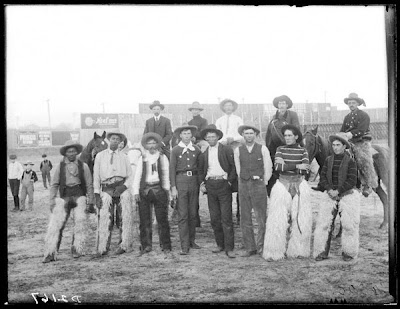 Thanks to Blazing Cat Fur for saving the Death Hippie's copy from oblivion so we can see it for what it is. Many fine comments:http://blazingcatfur.blogspot.com/2010/01/triumph-of-clueless-true-life-lessons.html
Posted by Dag at 1:35 PM 1 comment: