I've been to a number of places on Earth over the years, seen a number of ways possible to live, experienced a fair bit of strangeness and worse. Over-all, I've spent most of my life outside of America. But no matter how long I'm gone, and if I were never again to return, America would still be where I'm from and where my home is. I often wonder just what it is that some see when they envision America. What, for example, does Obama what's her name see when she looks at America? I see pictures of home, like these below. 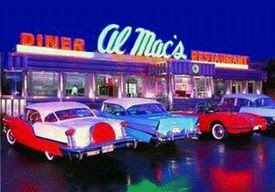 I don't see global warming and American imperialism and America as the world's worst place in history. I see beauty and freedom and happiness. Having been around a bit I can make the distinction.
Posted by Dag at 11:31 PM No comments: Links to this post

Truepeers responds: "In this day and age, you gotta be a guy without an internet connection."

APRIL 13--Meet John Scott Kincaid and Christopher Ray Fitzgerald. The Texas men were arrested this morning after they allegedly stuck up an adult video store and made off with 50 pornographic movies. According to police, Kincaid, 21, and Fitzgerald, 20, were nabbed shortly after the 12:20 AM robbery of Adult Video and DVD in Kilgore. After their vehicle was pulled over, officers recovered the 50 X-rated films, along with a Ruger automatic handgun, and a face mask, according to a Kilgore Police Department press release. Kincaid (top) and Fitzgerald are pictured below in mug shots snapped this morning at the Kilgore City Jail, where they were each booked on a felony aggravated robbery count. The men are suspects in two armed robberies last week, one of which occurred at the same video store robbed today. 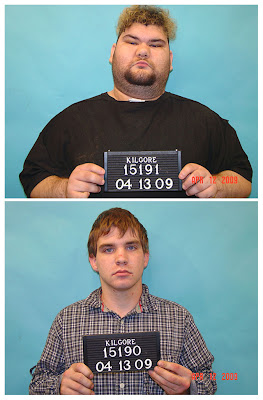 I can only imagine how terrible it must be to be in prison. And there are many today, even in America, land of the free, who are locked up, dehumanized, and not free to go about their ordinary lives. Most of those prisoners are, to go by statistics we read, poor, ethnic minorities, and under-educated. They are under-privileged. They are, one might argue, victims of society. If we let them out of prison, they wouldn't be prisoners anymore. And if the police would stop arresting people, then the jails would be empty for good. We could turn such places into schools and day-care centres and homeless shelters and other positive places.

Look at the ratio of poor people arrested for stealing and people who own banks who steal from people. See? How many times do we witness on the nightly news shows a sweep of the financial sector? Rapists are pursued relentlessly by police, but how often do we see the police arresting industrialist for raping Mother Earth? When a Muslim beheads his wife, he gets arrested. But when George Bush kills millions of poor Iraqi orphans, what do we get? A re-elected idiot.

Now even The One is proving himself to be just another American terrorist. He's making sure that Somali pirates will use violence against the people they kidnap. Hijacking ships and taking hostages was going just fine, with only occasional murders; but now, with the latest American resort to overwhelming and needless violence the Somali pirates will be forced to up the ante to cover the bet.

By MALKHADIR M. MUHUMED and MOHAMED SHEIKH NOR – 4 hours ago

MOGADISHU, Somalia (AP) — Somali pirates on Monday vowed to retaliate for the deaths of three colleagues who were shot dead by U.S. Navy snipers hours before in a daring nighttime assault that freed a 53-year-old American captain.

The Navy Seals late Sunday rescued freighter Capt. Richard Phillips, who had been held by pirates on a lifeboat that drifted in the Indian Ocean for five days.

"Every country will be treated the way it treats us," said Abdullahi Lami, one of the pirates holding a Greek ship anchored in the pirate den of Gaan, a central Somali town.

"In the future, America will be the one mourning and crying," he told The Associated Press by telephone. "We will retaliate for the killings of our men."

There was no need for any of this. If the world has simply dropped bales of dollars on Somalia and waved good-bye between trips, there would not have been any need for the Somalis to turn to piracy in the beginning.

He gave no details and it was not clear in what way the pirates could retaliate, though some fear they could take their revenge on the hundreds of other foreign nationals they hold on seized ships.

The rescue dealt a blow to pirates who regularly seize passing ships and hold them captive until multimillion dollar ransoms are paid. But it is unlikely to help quell the region's growing pirate threat, which has turned the Gulf of Aden and the waterways along Somalia's coast into some of the most dangerous shipping lanes on the planet.

Pirates currently hold more than a dozen foreign ships, most moored along the Horn of Africa nation's long coast, with about 230 foreign sailors from Russia to the Philippines.

Abdullahi Haji Jama, who owns a clothing store in the town, said: "We fear that the pirates may retaliate against the foreign nationals they are holding."

But he also said people feared "any revenge taken by the pirates against foreign nationals could bring more attacks from the foreign navies, perhaps on our villages."

Vice Adm. Bill Gortney, commander of U.S. Naval Forces Central Command, said the American operation "could escalate violence in this part of the world, no question about it."

Jamac Habeb, a 30-year-old self-proclaimed pirate, told The Associated Press that the three pirates' deaths were "a painful experience." Speaking from the pirate hub, Eyl, he added: "this will be a good lesson for us."

"From now on, if we capture foreign ships and their respective countries try to attack us, we will kill them," Habeb said. "Now they became our number one enemy," he said of U.S. forces.

So far, at least, it has been rare for Somali pirates to harm captive foreign crews.

The piracy scourge appears to have evolved partly out of an attempt by Somali fishermen to protect their waters against illegal foreign trawlers who were destroying their livelihoods. Some of the vigilantes morphed into pirates, lured by the large profits they could win in ransoms.

Pirates were defiant though, vowing the events would not stop them form seizing more ships.

One pirate vowed the events would not stop them from targeting more ships.

"The mere killing of three and capturing one will not make us change our mind," said one pirate holding a German ship anchored in the Somali town of Harardhere who refused to give his name. "We are determined to continue our business regardless of the recent killings and arrests."

The jihadi Somali pirates are going to escalate the violence. Who didn't understand that before all this began? And since it's pretty much impossible to imagine not knowing the result in advance, what's the next step? Do we throw up our hands and beg forgiveness and toss more bales of bucks on the beach? Or do we match violence with more violence till someone cries uncle? Someone has to back down at some point. In a game of Pirates and Hostages, someone has to lose. It's just too bizarre to compromise on who get robbed and who dies. Living with regular robbery and occasional murder isn't a great solution. Yes, we could; and yes, we could also let everyone out of prison so there is no criminal class. Some actually advocate such a step. The question is, are they in charge of the ship of state? Will Obama allow the ship of state to be hijacked, and will we all be held captive by Somali pirates and any other of low-lifes and criminal opportunists who care to dare? Who's in charge here, oh my captain?
Posted by Dag at 1:25 PM No comments: Links to this post