Dag Walker and the Jivaro Tsantzas Masters of Iquitos, Peru

I have been busy in Iquitos for this long time, writing books, of course, but also learning new and interesting things about life outside the norms of middle-class American living. Recently, I have learned that I am now fully qualified as a tsantza master. This is to say, I am a qualified "Head-shrinker" according tom my Jivaro buddies in town. I can now cut off a man's head, skin him, boil his stuff, stitch him up, and shrink his head down to the size of a clenched fist. I'm a qualified Head Hunter of the Amazon rainforest. I see on my horizon a new and lucrative career.

I look at shrinking heads as something worthy of our reflections. Look, if you will, at the Qur’an, particularly at the "Sword Verse" Qur'an, 9:5.

One of the most frequently quoted Quranic verses is chapter 9 verse 5. This verse is known as "The Verse of the Sword." Muslim terrorists cite it to justify their violent jihad. Correspondingly, critics of Islam claim that it commands Muslims to act with offensive aggression towards the non-Muslims of that period, and contributes to Islam’s final theological doctrine of aggression towards all non-Muslims of all times. Apologists for Islam claim that 9:5 is purely defensive. Which side is right?
As the Islamic source materials are examined it will become evident that verse 9:5 is part of the theology of jihad and is meant to be both offensive and defensive. It is directed against Pagans living both near to and far away from Muhammad.

The first premise of this blog is that dhimmitude is slavery and therefore a bad thing. The term slavery is, here, dhimmitude. Islam allows the non-Muslim to live if he pays jizya, or an extortion tax. Otherwise, the kufar, meaning us, must be killed. Here is what the Koran says:

9:5 When the sacred months are over slay the idolaters wherever you find them. Arrest them, besiege them, and lie in ambush everywhere for them. If they repent and take to prayer and render the alms levy, allow them to go their way. God is forgiving and merciful.

Convert to Islam, pay the jizya, or die. Get your head cut off, like so many people we have seen on videos.

Well, living in the Amazon jungle I took some things to heart, like learning ancient native customs, one of which is the art of tsantzas, shrinking heads. Muslims don't do that. They just cut off our heads and forget about them. I am more akin to the locals here. They and I share some Viking traits and feelings about freedom that I particularly value in myself and them. Some of my buddies here are Jivaro. Another, more p.c. name for them is Shuar.

1599, the Shuar were one of the few groups to successfully repel and maintain freedom from colonial rule. In that year, the Shuar killed 25,000 colonists during a revolt. From then on, the tribe lived as it pleased in relative isolation from the rest of the world, warring with one another.
This isolation and the Shuar's practice of creating shrunken heads -- called tsantsas -- has given them a fearsome reputation with the rest of the world.

The culture of vengeance largely characterizes the Shuar. Not simply violent death, but death by natural causes is attributed to an unseen, remote enemy attack. The concept of revenge is deeply rooted in Shuar culture. From a very young age, boys are drilled in the standing feuds his family has with other families. He is also taught that not exacting revenge in the form of violence is to welcome retribution from his fallen ancestors [source: Jandial, et al].

I can relate to much of that, especially when I'm visiting my friends and we sit in the kitchen and they show me how to skin a head and shrink it. Relax. No people shrunk. 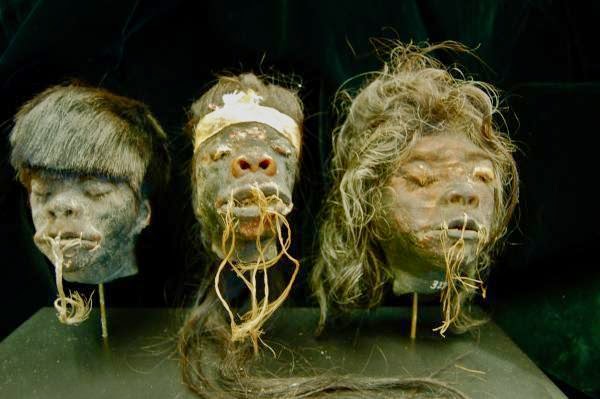 This is what I have learned.

Shrunken heads are an actuality. A single tribe, the Shuar, who live in a region of the Amazon basin that straddles Ecuador and Peru, are the only group known to shrink heads. They continued this practice until as recently as the 1950s.

When a family member dies -- regardless of the cause -- a tribesman consults a member of the spirit world under the influence of natema to learn the culprit. The answer comes in a vision, and the family sets about recruiting other nearby households to join them in a loose confederation with the purpose of exacting revenge. Over the course of several weeks or months, the group prepares for war, at times even alerting the intended target of its plans.

At each of the stages in preparation, the party leader -- called the curaka -- presides over the process. The members of the raiding party are attentive to each step, reinforcing the curaka's actions.

I sometimes see the world in terms of 9-11. I see that many Muslims are all too happy to support the murder of almost everyone, even other Muslims, if the man with the sword deems it just. This makes me anxious. I don't need ayahuasca visions to tell me more about who is responsible for 9-11. I got that part quickly all on my own. The question is how to react. Should I return the Muslim practice of cutting off their heads? If so, then what to do with the bulky, bloody, unsightly mess? I deal often in antiques and fine art, which a bloody head is not any of. But maybe, with some effort and skill and thought, one could adapt....

Thought to harness the spirit of an enemy and compel him to serve the desires of the “shrinker,” the practice of shrinking heads is known to have originally held a spiritual significance.

From the 19th Century until very recent times, however, the practice of shrinking heads was extended to trophy hunting, exotic trade, as well as simple curiosity seekers willing to pay exorbitant prices to possess the head of another human being.

I live in the Amazon jungle. My friends are Jivaro in some cases, and I need a job. I hate Islam. All of this makes me think, and made me seek out, some resolutions to my concerns, which in turn led me to learning how to shrink heads for fun, profit, and social justice. I asked my buddies how to shrink heads.

The only known head shrinkers are a group of indigenous people from the northwestern region of the Amazon rainforest (Ecuador and Peru) collectively known as the Jivaroan peoples. Their most notorious tribe, the Shuar, live at the headwaters of the Marañón River.

Shuar people are Jivaros. The Marañón River is just over there a few blocks away.


Known as creating a tsantsa (or tzantza) to the people of this region, head shrinking [and] decapitating and then shrinking their enemies' heads also served as a highly dramatic way to warn enemies of the fate awaiting them should they venture into Jivaroan territory uninvited.

It is so right for me. I go totally native when we get into this kind of groove.

I can now kill all birds with one stone: Defeat jihadis, cut off their heads, shrink them, sell them to collectors, and have some fine satisfaction that I'm doing good things in the world.  People were dismayed when I said I was going to South America to carry on the fight against jihad. They asked what on earth I would do there. Now we know: I will return to the Middle East and go into the head-hunting business. War trophies.

There must be a God. How else could I have ended up here learning this stuff so I can return to the world of Islam to take it to them in such a fashion and at the same time make a fine living? Yes, there is a God.

Posted by Dag at 9:26 AM No comments: Links to this post