Seems that folks get a lot of fun from parodying iconic America. It's an easy laugh. I enjoy it too. That someone came first and created something others play with and ridicule is not the point. The original stands in it's glory for those who appreciate it for what it is; and then we can take a detour to have a bit of fun thanks to the painter's efforts and vision. It's a pity when the philistines don't realize their ironies are pretty shallow and derivative; when they think their parodies are the ultimate creation. We can laugh at Grant Wood's image of Americans. 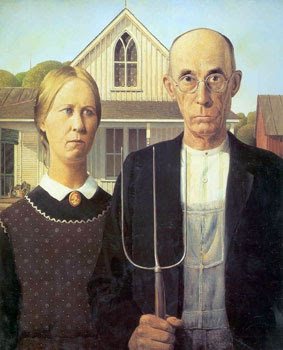 We could laugh at Walker Evans' characters while we're at it. 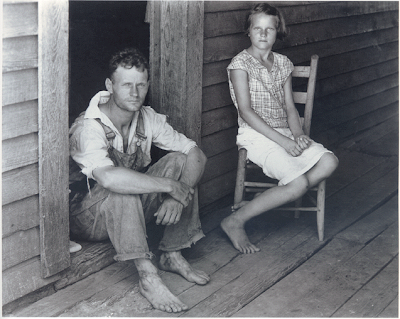 American Gothic is a painting by Grant Wood from 1930. Its inspiration came from a cottage designed in the Gothic Revival style with a distinctive upper window and a decision to paint the house along with "the kind of people I fancied should live in that house." The painting shows a farmer standing beside his spinster daughter, figures modeled by the artist's dentist and sister. The woman is dressed in a colonial print apron mimicking 19th century Americana and the couple are in the traditional roles of men and women, the man's pitchfork symbolizing hard labor.
[....] 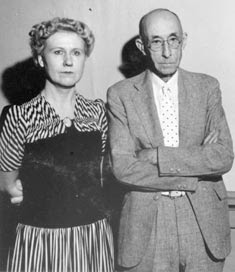 America is something of a parody of the country I knew as a boy. 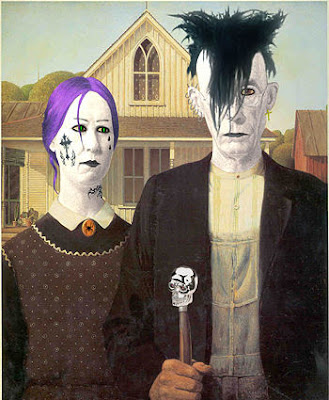 Maybe we can all have a bit of fun and an easy laugh on the way out. Turn on some tunes and kick back and let Obama do his thing to our nation. 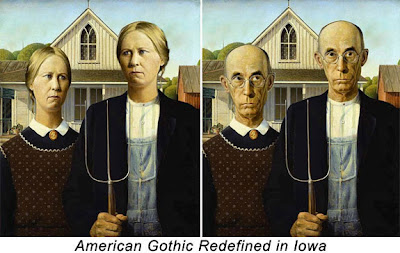 The Mississippi Delta was shining
Like a National guitar,
I am following the river
Down the highway
Through the cradle of the civil war,

Poorboys and Pilgrims with families
And we are going to Graceland,
My traveling companion is nine years old
He is the child of my first marriage,
But I've reason to believe
We both will be received
In Graceland, 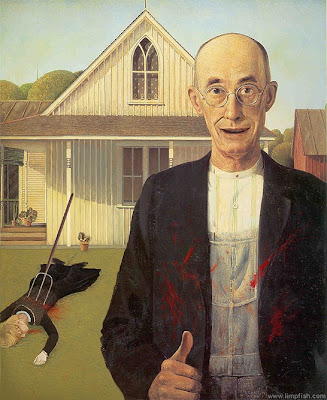 And my traveling companions
Are ghosts and empty sockets
I'm looking at ghosts and empties,
But I've reason to believe
We all will be received
In Graceland, 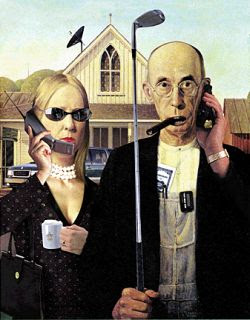 There is a girl in New York City,
Who calls herself the human trampoline,
And sometimes when I'm falling flying
Or tumbling in turmoil I say
Whoa so this is what she means,
She means we're bouncing into Graceland,
And I see losing love
Is like a window in your heart,
Everybody sees you're blown apart,
Everybody feels the wind blow, 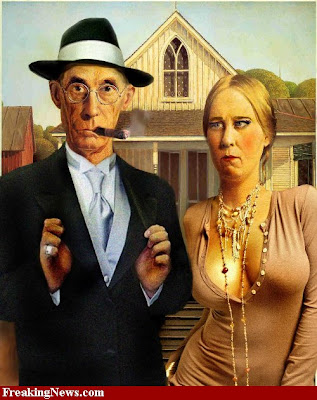 In Graceland Graceland,
I'm going to Graceland,
For reasons I cannot explain
There's some part of me wants to see
Graceland,
And I may be obliged to defend
Every love every ending
Or maybe there's no obligations now,
Maybe I've a reason to believe
We all will be received
In Graceland

Well, where does one go in a land of ironic parody that most people don't know the origins of and the meaning of therein? Where do we go when the original vision is lost amidst self-indulgence and caricature passing for authenticity, so many not knowing the difference?

Thing change. Who's to say that America shouldn't be run by Bill Ayers, a terrorist? By Jeremiah Wright, a nasty little bigot? By Pinch Schultzberg, a simpering anti-Semitic hippie? Obama and the Chicago goon squad? Sarah Palin is American Gothic. Thing change. It's irony. It's hip.