Below we have two clips from a short essay by Bertonneau on classical Gnosticism. What makes this particularly interesting is that we find obvious parallels between it and today's Left, as Voegelin would point out in a different way. Bertonneau moves from Voegelin to the main source for some clearer background than one finds in Voegelin, a big help to those who come to Voegelin from Archaeology of Religion. Or, to be a bit clearer myself, we see in these clips that Gnosticism has its own history, which Voegelin is happy to work from. The current lot in political power in Washington, "brilliant" as they are, likely have no ideas about any of this, being too smart to care about the ideas and insights of Dead White Men. For the rest of us, this is pretty interesting.

Thomas F. Bertonneau, "Gnosticism from a Non-Voegelinian Perspective, Part I," Brussels Journal. 27 May 2010.

II. When Gnostics say, “Look to God,” they are invoking the knowledge-without-experience, the special knowledge, that the word Gnosis denotes. Such proprietary knowledge they specifically refuse to share with outsiders because possession of it – or the claim to possess it, for that is all that the outsider has – is what differentiates the illuminati from the vulgate. Thus by virtue (so to speak) of their special knowledge, the Gnostics consider themselves elect. They are an extreme in-group phenomenon. Under this conviction, they “proceed to assert that Providence cares for them alone.” When the Hidden God abolishes the corrupt world, only those whose being has been transfigured by secret knowledge will remain, and they, too, shall be as gods. Compared to those in whom the secret knowledge does not reside, and who are therefore not transfigured, the illuminati are already gods. They may thus mock and revile their ontological inferiors.

IV. Augustine’s plausible representations of the Manichaeans in The Confessions indicate of those sectarians the same hatred of inherited custom and established social hierarchy that Plotinus attributed to his Gnostics, the Valentinians. The devotees of Valentinus regarded the material world as intrinsically and inalterably corrupt. They fervently desired that world’s abolition, after which the pure of heart would be reunited in a kingdom of supernal light known as the Pleroma, or “Fullness.” Augustine would like to see the world improved, but he knows that human behavior is stubborn and that it takes historical ages for a new moral order to take hold. Before he heard differently from God, for example, Abraham would have understood the offering of a child in sacrifice as ordinary religious practice, which it was in the Bronze Age almost everywhere. The Manichaeans, by contrast, exhibit hysteric impatience both with secular recalcitrance and with the crooked timber of humanity. There is one dispensation, theirs, and not holding to it can be charged against an individual even though he had the misfortune to live before the dispensation could be published. The Manichaeans agitated for apocalypse now, the fundamental transformation of a way of life, to coin a phrase.

These excerpts cover a lot of ground in a short space. Well worth the few minutes it will take to look at the full essay linked above.

I'm getting ahead of myself here writing this bit about Czeslaw Milosz's epigram of “An old Jew of Galicia” in his book The Captive Mind, but it seems appropriate in light of the Bertonneau essay here. The beauty of Gnosticism is that the gnostic is not only right, he is perfectly right all the time about everything; and those who don't agree with him fully are totally wrong all the time about all things. Being right in this sense means one has a monopoly on the meaning of life, and one can sneer at those fools who don't share the secret. Everyone else's life is meaningless and wrong and pointless and despicable. What armour. No criticism of oneself can ever penetrate. That is perfection for the man who is terrified of existence and its cosmic loneliness. All of ones terrors can fit into a bag one can fling away, and from then on, one is free to be the fool he is without fear of himself and his knowledge of his foolishness. One can even be proud. Everything is permitted. That's got to be attractive to many. Complete control of life and the universe.

When someone is honestly 55% right, that’s very good and there’s no use wrangling. And if someone is 60% right, it’s wonderful, it’s great luck, and let him thank God. But what’s to be said about 75% right? Wise people say this is suspicious. Well, and what about 100% right? Whoever say he’s 100% right is a fanatic, a thug, and the worst kind of rascal.

Here's an excerpt from an essay by Noah Pollak on a Jewish Israel-basher, what we call here a dhimmi, Peter Beinart. Pollack sums up nicely the idiot pose that anti-Zionists are somehow, in any way, daring and courageous. Obviously, and to most that's not too obvious, to be anti-Zionist, anti-Israel, or even openly anti-Semitic, an outright and full-blown Jew-hater, is pretty safe in the West, and often applauded by our intelligentsia. To call this anti-Semitic pose "daring" or anything other than as safe as can be is to lie. To openly agree with Conformity Hippies isn't daring. What the fuck do these people think they can get away with? Seems that it's nearly anything at all. And who's going to stop them? Not the World Jewish Conspiracy, I'm thinking.

Try this just for fun: Stand on the street and yell: "Death to Israel. Death to America." No doubt that even in the middle of Kansas on the Fourth of July you'll find a lot of people cheering you on. But dare whisper to no one but yourself: "Stop building mosques at Ground Zero. Mohammed was a paedophile warlord," and see if you don't get into a fist fight, maybe go to jail for causing it. Pollack writes of Mr. Daring Beinart Leftard:

As the astonishingly polite reaction to his article over the past week has demonstrated, there are few postures today from which it is more comfortable and advantageous to call out one's anguish and concern than as a Jewish critic of Israel. The ranks are full of people who have made careers out of being contemporary prophets, traveling the land to warn the Israelites that their arrogance and sin is inviting catastrophe. The key difference is that the biblical prophets were often despised and persecuted figures, whereas the prophets of today enjoy the embrace of a vast array of institutions, foundations, and publications.

The sad truth is that Peter Beinart isn't any kind of trailblazer or whistleblower, and he most certainly has not earned himself any trouble by coming out as an Israel-basher. He is someone who has rather belatedly fallen completely and predictably into line with the demands his ideological compatriots make for orthodoxy when it comes to their increasingly passionate interest in assaulting Israel and championing the Palestinian cause. In Beinart's work, we are not witnessing an act of courage but rather a spectacle of conformity.

Then, mere moments later, I found this:

(1) [update: Beinart, via email, says that this is a misinterpretation of what he meant when he said that he found the piece hard to write, and he has explicitly disclaimed the idea that he was exhibiting courage. Fair enough.] by criticizing Israel and the American Jewish establishment, but nothing is more trite, and better for one’s career in left-wing circles, than to be a Jewish liberal/left intellectual publicly attacking Israel. Exactly how many pro-Israel left-leaning organizations and periodicals are there right now, beyond the New Republic? Even back in 1987, a journalist friend of mine was turned down for a job from Village Voice because it wouldn’t hire anyone who was sympathetic to Israel, especially anyone Jewish. Things have only deteriorated dramatically since. Fact is, Israel has become a liberal-conservative issue in the U.S., with conservatives overwhelmingly supporting Israel, liberals much less so, and liberal intellectuals often hostile. If you’re someone in Beinart’s shoes, writing an essay like his is, as Pollak puts it, “a spectacle of conformity,” . [UPDATE: Okay, Beinert didn’t claim to be a profile in courage. But the fact remains, even if we grant that Beinert is sincere and not a careerist, if you’re Jewish it’s hard to stay in good graces with the intellectual left, here and abroad, unless you write the obligatory hand-wringing piece criticizing Israel.

Does it change a thing? No. Conformity Hippies still suck. It's all a pose, and they are not anything but scabs. They still suck. They will always suck.

Another up-date. This story is everywhere that counts.
There's more to this story.

It's not likely that readers today will recall Joe Slovo, leader of the South African Communist Party, a Stalinist hack who toed the Soviet line regardless of its evils. One criticism we can't make of Slovo is calling him a hippie. He wasn't. He was a stolid party hack. He and his mates would twist anything at all to fit the Party line, and then twist it again in contradiction of moments before if they found deviation from the current Party line. You had to have known these people to grasp how committed they were to their religious ideology. They were barely human. They weren't clownish, they were boring and metallic, brittle and hollow. I raise this because Peter Beinart claims that Joe Slovo was his hero.

Dear Reader: You have to imagine for yourself what Beinart says when he says that Joe Slovo was his hero. Imagine proclaiming that one adores a phoney and violent robot-man who would on orders exterminate the world's population for the sake of ideological purity. Slovo was a mad-man. But no, not mad, just filled with boring and evil conformity to his masters. Beinart adores him. Here's more, an excerpt from Ron Radosh at Pajamas Media:

Way before it was popular among today’s liberals, Communists like Slovo who followed the Soviet line on Israel called it an apartheid state and condemned it leaders as racists. Now, their line is being echoed by today’s liberals like Beinart. The Beinart article is just the latest example in a new chorus of Israel bashing. As Noah Pollak says, Beinart has “fallen completely and predictably into line with the demands of his ideological compatriots.”

And given that we now know one of his heroes was Joe Slovo, Stalinist leader of the SACP, why should we all be so surprised? Liberal Zionism is becoming an endangered species, as its once proud members like Beinart have become comrades in arms with the Joe Slovos of the world. By choosing Slovo as his one hero, Peter Beinart has helped us understand his comfort level with joining the Israel bashers. He has also shown us how far liberalism has fallen from its once admired heights.

What Leftist heights? That part confuses me. That Beinart would like Joe Slovo is not surprising, being too typical of a sucking leftard Conformity Hippie.

Bearing up on the Procrustean Bed

SRINAGAR: It seems these are the worst of times to be a militant in Kashmir. First, a Lashkar-e-Taiba terrorist was axed to death by a teenage girl in Rajouri roughly a month ago. Now, a bear has mauled two Hizbul Mujahideen militants to death as they hid in its cave in Shopian, South Kashmir.

Yes, this is the cartoon of Mohammed that is going to drive Muslims to murder and mayhem. 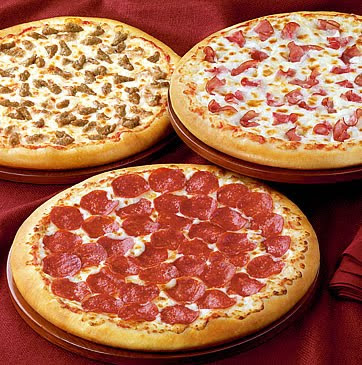 I had to do it. It's just so real. Unfortunately, Muslims will have to burn buildings and kill each other over this, but true will out. It's totally Mohammed Pizza.What can I say? You can see his face right there.
Posted by Dag at 1:30 AM No comments: