"Get out of our country"

"England belongs to the Muslims. Get out of our country."

The natives are restless. Some English are fed up with Islamic posturing in England. They seem to be sick and tired of Muslims running amok and rioting and killing and -- dare I point this out?-- poisoning the local food with shit. OK, I do dare: Here. The English might have some sense of humor, but there's nothing to laugh about when Muslims are on a rampage to kill civilians and destroy the nation in the hope of replacing the previous regime with Sharia. Some English are organizing to fight against it. One such is the blogger, Lionheart. Others include the English Defence League. Muslims, leftards, and Charles Johnson of Little Green Footballs don't like it. Of Lionheart, this is what one Muslim has to say:

You made it clear on TalkSport that you want war with Islaam itself. In a country full of neo-"terrorists", you are the perfect target.

England belongs to the Muslims. Get out of our country.

The note above, continued below, is regarding Paul Ray, a.k.a. Lionheart, the English blogger. Paul Ray likely has fewer years in the English school system than the articulate and literate jihadi threatening him, but Paul is a decent fellow. The jihadi exhorts his fellows to kill Paul Ray. The jihadi writer, a.k.a. Bilal, appears to be associated with the group of whom this featured fellow is part of: 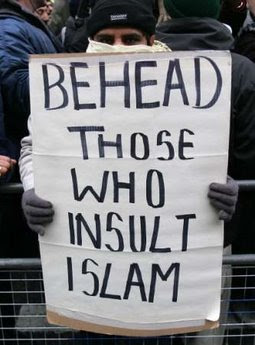 This [i.e. Paul Ray] is who this ugly filthy piece of sub-vermin is. If you see him (most likely around Luton or Dunstable, Bedfordshire); you know what to do. As for the rest of the Muslims reading this; do as we're doing, and spread this photo around to militant Muslims in the UK as we are. Also, keep an eye on the news. Allaah knows, you might see a repeat of what happened to Theodoor van Gogh at the hands of our beloved brother Mohammed Bouyeri in Amsterdam on 2 November 2004.”

Lionheart is a decent sort. At least he doesn't threaten to murder anyone. It makes me wonder if there are many like him in Britain today. Decent folks, I mean. If so, then we'll see more of the like of the "English Defence League." Paul, by the way, has disaffiliated from that group.

Welcome to the English Defence League

Watch the video [EDL link.] below. Anjem Choudary [wikipedia bio.] and his sort are who we oppose. Not Muslims, Jews, any race or religion, just Islamic Extremists, and Sharia. ...

Who are the EDL, you ask? Well, according to the ever-psychotic Charles Johnson of Little Green Footballs, they're racists like that crypto-soccer fan, Robert Spencer of Jhadwatch.:

Once again, an anti-Islam protest (marketed as “anti-Islamic extremism”) in Britain by the “English Defense League” (a gang of skinheads, racists, and soccer hooligans with connections to the BNP, although they’re now squabbling) has resulted in a riot in Birmingham....

And look who’s hanging out with the English Defense League now, on a tour of Britain with wacko fundamentalist nutbag Martin Mawyer and his “Christian Action Network” — none other than Robert Spencer of Jihad Watch....

There was a joke! back in the old days in journalism, "Never let the facts get in the way of a good story." It was funny. We laughed. Today I feel I must explain that the EDL did not 'cause a riot.'

Verbs, nouns; whatever. It seems to be all the same to Charles Johnson.

The Canadian journalist Pierre Berton is said to have claimed that the strongest urge a man has is not for food or sex but to rewrite another man's copy. Mea culpa. Here are three comments from the above B.J. post [I tinkered with the first] that I hope you'll find interesting:

[I]f it isn't Islam rearing its ugly head again. The extremists grow bold now. They must have added 1 and 1 together and seen that it makes either 0 or 2.

First summand [i.e. an addition] of the left term being: Their growing numbers both in [M]uslim headcount and percentage of radicalised youth correspond nicely with an increasing fearfulness and attentiveness by the executive bodies towards Islam.

Second summand of the left term being: A [B]ritish reactio[n] to the growing insolence of [I]slamic assertiveness. The radicals know that there will be clashes. Tranquillized [B]ritish officials might not see any danger or secretly believe that the transition to the Umma Kingdhim [i.e. United Kingdom] will be a smooth one. But the [B]ritish common populace, having more to lose than to gain (or keep!), is free from cognitive dissonance. This is true insofar that [the] doublethink that they are subjected to in public[,] as well as [in their] working environment[,] does not [penetrate] ... their private sphere of pubs, parties, family reunions.

The EDL is one stepping stone towards autocht[h]onous [i.e. local or nativist] radicalization. The jihadis see it, know it. They embrace the coming fight because they are now at a stage where they think they might win. The opponent term [i.e. natives] might change from a summand into a subtrahend [i.e. the number subtracted], but Islam is playing to win now. Because they are greedy, they are also unrestrained. So the preachers give their go-ahead, for they draw confidence from centuries of success. Though it is a success story with intermittent setbacks (Tours et Poitiers, Granada, Vienna), they have every reason to believe that if conditions are already as favorable as now, then surely it must only be a matter of time until Europe makes its final stand [i.e. is defeated and becomes Islamic].

A nation's first line of defense is its military, controlled by its government. When the government betrays its trust and permits a foreign invasion, the nation is thrown back on its second line of defense, the unorganized, ill-armed citizenry. That is what we are seeing--an early stage of the English defense of the homeland, in defiance of their treacherous government. God willing, the English will arm and organize, city by city, town by town, and village by village. St. George!

The EDL and "autochtonous radicalization"

The EDL is neither a precursor to English militancy en masse nor a vanguard of resistance to Islamification. The prevalence of both pluralism and apathy in English society make mass mobilization and organization unlikely, and the EDL's adherence to political correctness takes it far from "autocht[h]onous radicalization".

Resistance to Islamification will no doubt take the form of small militant groups that carry out low-level warfare with or without popular support, a situation reminiscent of the paramilitaries of Northern Ireland.

Dramatic escalation along Balkan lines must occur before British society considers Islamic violence and political activism anything more than criminality.

The English government has turned on its natives, in this instance referring to the locals as Nazi Brownshirts:

The story is quite pretty till you come to the ugly facts: The EDL were seriously outnumbered by jihadis from a local mosque, and they took off, to be polite about it. The police were then faced with a thousand high-octane jihadis. You kind of miss that in the following story:

A cabinet minister last night raised the spectre of a return to 1930s fascism, warning of "parallels" bertween rightwing groups planning protests in Muslim neighbourhoods and Oswald Mosley's incendiary marches through Jewish areas of east London in the 1930s.

Announcing a government drive to address issues alienating white, working-class people at risk of being "exploited" by the far-right, John Denham, the secretary of state for communities and local government, singled out protests being organised by the English Defence League.

The group has organised a number of protests in recent months which have turned violent. It is to hold events in Manchester, Leeds, London and Bristol in the coming weeks. Yesterday small groups of EDL supporters gathered for a protest outside a mosque in Harrow, north-west London. They were confronted by at least 1,000 anti-fascist protesters. Police arrested 10 people after clashes, nine of them for allegedly possessing weapons. No injuries were reported.

We can always count on The Grauniad [worth a click on] to make typos, which I cleaned up here, and we can also count on them to be fucking idiots. We can count on Paul Ray to be a decent guy. We can count on Humanness to form groups of like-minded people who will push their boundaries as far as they can, until they are stopped and can push no further. So it is with Islam and Muslims. They will push as far as they can, all the way to Sharia across the world if we let them. We do, unfortunately. It's going to get a lot (more) people killed. I don't hate Muslims, so I often find myself thinking it's a good idea to set boundaries for them they cannot cross so they don't get themselves exterminated. Some folks don't think it through, and they might not care anyway, driven mad from hatred; so I put it this way: If we kill a billion Muslims, who will clean up the pestilential mess? Even if one were a total monster, how do we bury the dead fast enough to keep the rot from killing the entire population of the world? Better to set some boundaries. The locals will fight, and they should; and the political elites will call them Nazis and such, but who-- really?-- who gives a damn what the toffs say? Boundaries for Muslims before things get out of control and we, the non-Muslim autonchthonic, find we do have to exterminate a billion people just to have the freedom to be who we were already. 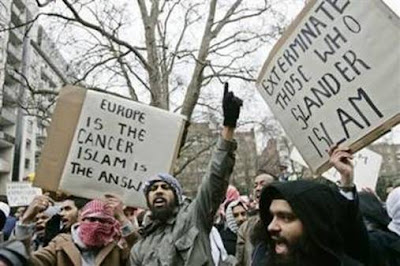 Muslims have to learn to get along in the world or they have to get out. They'll have plenty of help if they can't figure it out on their own.
Posted by Dag at 11:54 PM 2 comments: Links to this post