I remember the day I came to Iquitos, not expecting much from my visit, which I thought would be a short one of seeing some sights and enjoying a few days in the jungle, a rest from the hustle of Pucallpa where I had a girlfriend who made my days nervous from the concern that she might run into the other girl I was seeing there. So, a short trip to think about things, to finish up a bit of travel in the Peruvian Amazon before heading off to the north coast to pick up my girlfriend in Mancora where I would get a job at the local university, get a house and live with the lady and her daughter and there, perhaps, call it a life. but things in a random life often fall by chance into routines of the past, and in my case it means walking around talking to people, sitting down for coffee, asking questions about the purpose of such a strange adventure that seems to have no purpose at all. It's a card game. I keep coming up with kings. 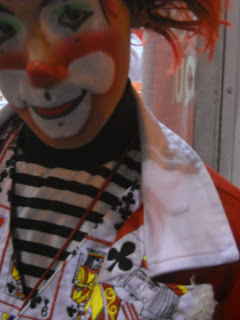 I move on to see the next hand. Once in a while I see a queen. 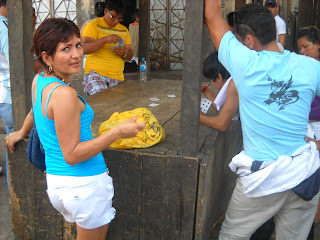 In Lima and beyond in my first months in Peru I stooped down and picked up a playing card laying face down in the dirt, and when I picked up the first I found I had a tarot card of the King of Swords. I don't find tarot cards by chance often, and since it was pretty I kept it with my now huge pile of stuff. Over the next few months I found two more playing cards on the street, each card laying face down, and each a King of Spades. I found that coincidence remarkable. But now I see people playing cards daily, and finding Kings of Spades, even a King of Swords seems totally likely. Sort of. Or maybe, which I prefer, there is a message from the gods telling me something. I don't know what it is, so I keep wondering.

And then, yes, I find a Queen of Hearts or even a lady standing in Belen Market with card players. she smiles, and my day shines. I continue on to visit my buddy in the market, stopping to chat a bit on my way to visit my other buddy who owns all the stalls on his particular street, the Chinese, from what I gather, owning many stalls they rent out to the locals. What fills is what sells. A lot of people smoke tobacco, to my surprise.


They smoke handmade cigarettes and cigars, tobacco grown in the Amazon somewhere, dark and pungent and probably deadly. But it's a living and a life. 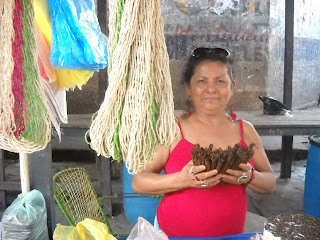 Life, of course, is more than smoking and eating, it is much to do with love and laughter. I find that too in abundance in the Belen Market where I spend much time with those I hope sometime will be real friends, should my few days here extend even beyond my now few months here. 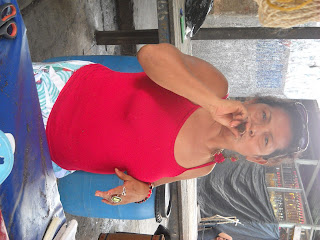 As I wander around and meet my buddies and chat I find out more each day about the continuing process of making the city better, in this case that the Chinese government is installing the city's new waterworks system, which the locals are hopeful will actually work, the problem and concern being that if it fails the backup of sewage will be far worse than the current problem of an inefficient system. But hope springs, the cards falling as they may in this less than rational world. One need take care in negotiating through it.


Sometimes it's the smartest move to find a place out of the way and sit it out, waiting for a quieter time to make ones move.


There's room for that here in Iquitos. And there is also sometimes nothing one can do at all to preserve oneself from death from seeming nowhere. It's a matter of chance. Even the fiercest predator finds himself at the mercy of the Fate.


It's in the cards. And there is nothing one can do but smile and wait out eternity. 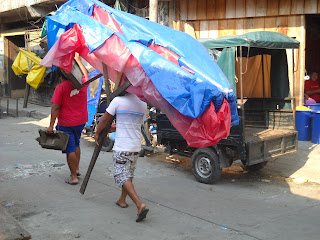 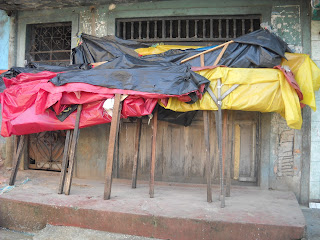 Maybe He too is at rest.

Maybe tomorrow and tomorrow and tomorrow the kings and queens of Belen Market will come to some better day of peace and plenty when the river rises and the rot and sewage is washed away for another season. But not today. Today one rests and hopes and perchance, one dreams. I linger here, I stay and I might stay on tomorrow as well and tomorrow still.

Tomorrow, and tomorrow, and tomorrow,
Creeps in this petty pace from day to day,
To the last syllable of recorded time;
And all our yesterdays have lighted fools
The way to dusty death. Out, out, brief candle!
Life's but a walking shadow, a poor player
That struts and frets his hour upon the stage
And then is heard no more. It is a tale
Told by an idiot, full of sound and fury
Signifying nothing. 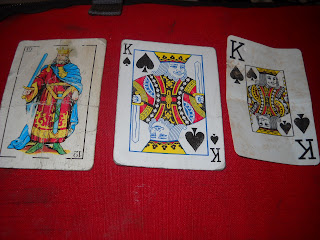