There's no end to the nonsense we get from those who hasten to condemn Geert Wilders and his 15 minute film, Fitna. In the piece below some Muslim whinges about Wilders being a racist. Iranians do insist that Islam is a race in itself: that if one is born a Muslim, then one must forever be a Muslim or one must be killed. Those of us in the civilized world do not assign religion to people on the basis of race or ethnicity or family. For us it's a matter of free personal choice. That seems to upset Muslims and Leftists as well. Thus we read such things as this article below in which there is planned a demonstration against Wilders' supposed "racism" for his condemnation of Islam as a fascist poligion. The Left and the Muslim umma generally can't think of one good reason not to dismiss Islam as a fascism, so they stoop to idiotic name-calling. Islam is not a race. The Left and Muslims often pretend they don't get it. The rest of us do, and it makes the others look increasingly dishonest and ugly. 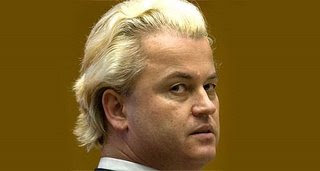 on Saturday whose principal target will be Geert Wilders. The group hopes the rally "Will symbolise a turning point in the Dutch political climate that is now characterised by fear and hatred." De Volkskrant says it will be the first major anti-racism rally since the mid-1990s. Mohamed Rabbae, secretary of a Moroccan organisation, says that the rally will be linked with the United Nations International Day for the Elimination of Racial Discrimination. "But we're not playing hide and seek. Wilders is the spokesman of racism. And racism is the concrete rot of society."

[Mr Wilders refused to say when his anti-Qur'an film Fitna will be released, only that it "will appear on the internet before the 1st of April".]

http://www.expatica.com/nl/articles/news/RNW-PRESS-REVIEW-_-19-MARCH-2008.html
Civilized people understand there is nothing innate in being a Muslim. One needn't be or if one is one needn't remain being a Muslim simply due to being a Moroccan, for example. The "racist" canard is a canard. It is bullshit.
Posted by Dag at 12:05 PM

Labels: fitna, geert wilders, islam is not a race, netherlands

And this is where the bullshit leads.