"For a government bureaucrat to call any publisher or anyone else to an interrogation to be quizzed about his political or religious expression is a violation of 800 years of common law, a Universal Declaration of Rights, a Bill of Rights and a Charter of Rights. This commission is applying Saudi values, [Saudi blogger arrested] not Canadian values."

Free speech in Canada and the world generally is today under attack, not just from the usual suspects, not just from obvious totalitarians like Stalinist-style communists or Chinese obscurantists or Third World dictators, as always, but from those who, not so long ago, marched for civil rights for the masses, for ethnic minorities, for women, for the "marginalized" in general, i.e. from the Left. That should come as no surprise, so long as we know the roots of the Left, it then being inevitable and obvious. The Left! What a miserable and vicious joke it is to look to them for anything but hatred and evil manipulations. Question their moralisms, their self-adorned holinesses, their pretentious and affected concerns for the people, and you will see dirty little grubs who want nothing more than power and glory, even if it is tinsel thin. Offend the Leftist phantasy of their gnostic insight, of their perfect vision of how we all should live and think, and then, friend, you might well find yourself in a courtroom trying to defend yourself without a hope in Hell; or you might just find yourself sitting on the street corner, your possessions slung from a rope over your shoulder, homeless and freezing, nowhere to go since the likely places are barred to you, as in the case of William "Bill" Simpson in Vancouver, Canada. Say the wrong thing, publish an offending piece on the Internet, link to a blog the povertarians don't want you to see, and you might find yourself in prison, as Lionheart faces today in Lutton, England. Lionheart is a British blogger who writes that he is under threat of a seven year prison term for blogging in such a way that the police in Lutton are waiting his return to the country to arrest him. About Lionheart's case there is a nifty comment here from an otherwise uninformed and thoughtless Lefty. Even he gets it:

Surely the bigger issue here isn't whether or not he actually goes to chokey, it's the fact that we now live in a society in which he credibly could.

I'm an artist by trade. I don't draw political stuff, but if I did I would consciously avoid anything to do with Islam etc for two reasons (a) a muslim might kill me and (b) I might fall foul of the "religous hatred" laws.

It's almost beyond belief that we're now in a situation where these things are credible threats. I'll be honest here. I don't like Islam very much, and the more extreme it is the less I like it. The same goes for Christianity, Hinduism, Sikhism, Buddhism, Wicca, Scientology, Greenism, Socialism, Conservatism, Fascism, Syndicalism, Anarchism, Thatcherism and Gordon Fucking Brown, because I don't like ideologies, period, because the more extreme they get they inevitably end up with somebody saying "well, we have no choice, we're going to have to start killing people".

The fact that we now have laws preventing people even criticising approved ideologies scares the daylights out of me.

I know Gordon Brown isn't actually an ideology. I just don't like him very much.

Back in Canada, in Alberta, Ezra Levant is being harassed by the Albert Human Right Commission.

"Today at 2 p.m. I will appear before an Alberta "human rights officer" for an interrogation . I am being interrogated for the political crime of publishing the Danish cartoons in the Western Standard nearly two years ago."

Ezra Levant, quoted at Covenant Zone.
Being a Jewish pubisher of a conservative magazine is only slightly more offensive to the professional Leftist than is linking to a blog that exposes some of the Carnegie Centre staff in Vancouver, Canada as lazy, manipulative, and fascistic. Well? Why is Simpson out on the street? A Star Chamber proceeding against Simpson resulted in his removal from a community centre for the city's poorest denizens. The claims trying to justify Simpson's removal, his banning from the centre, change with the wind, it seems. What doesn't change is that Simpson is still on the street. The povertarians are still inside the building manipulating the poor.

"I have no faith in this farcical commission. But I do have faith in the justice and good sense of my fellow Albertans and Canadians. I believe that the better they understand this case, the more shocked they will be. I am here under your compulsion to answer the commission's questions. But it is not I who am on trial: it is the freedom of all Canadians."

Ezra Levant is on trial for republishing twelve cartoons from a Danish paper. He's not on trial in a court of law but in a Death Hippie mockery of a court, one that has some legal powers to fine him and wreck his life. Levant published some cartoons that some Muslims feel they can make a scene over. This is an obvious direct attack on all Canadians who value liberty. Not all Canadians do. I value free speech. I don't mind going to jail to defend my right and yours to say and write any obnoxious thing I choose to. I don't like Islam, and so what? Islam is a fascist poligion. There is nothing in it for me to like. Like its later cousin, Nazi-ism, Islam is a fascism that I work to destroy, just as Islam works to destroy my freedom. and yours. The very same kind of povertarians who hound William Simpson are to be found in the Human Rights Commissions in Canada. To give a fine chance to anyone who cares to complain to them about me, I present a lovely portrait of the founder of Islam, the man who at 54 years of age married and had sex with a nine year old girl, Aisha. Here is the perfect man, according to Islam: Mohammed. 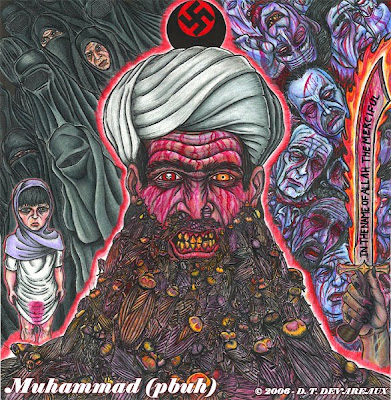 Your Highness, I'm so pleased to find you in good health; our lying media have told us you died years ago; but now it's plain for all to see that our are alive and reading our blog. Wonders truly never cease.

Since I now have your attention, may I kindly direct you further to our friend Derek Devereaux. He is the one who took the photograph of Mohammed, above. You can find Derek and his work at The Study of Revenge, a blog of further works on Islam and including some of the best commentary on the Internet.

You may well wonder why his blog is entitled " The Study of Revenge." Lt me inform you, your majesty, that the title comes from John Milton, Paradise Lost, on of our better works of art and literature, we infidels having a broader range of books to choose blog titles from than you Mohammedeans. In Derek's case he chose the line as delivered by Satan cast from Heaven, Satan enraged and now dedicated to an eternal struggle to regain his place in the right order of things. but Derek, being a highly sophisticated writer has no intentions of comparing himself to Satan per se, he means to give to the Islamic world the notice that he will present himself to you as the unrelenting force of sheer evil revenge that will never stop till Islam is defeated for its crimes against Humanity, and particularly for the crime of 9/11, in which the vast majority of criminal murderers were Saudi subjects, your subjects, Your Highness. You are on notice. We are coming for you. We will never stop. We will destroy you.

You, on the other hand, are very likely following the 7thh century tribal code of desert Arabs, otherwise known as Islam, that compels you to "invite" us to become Muslims before you decide to attack us either to kill us or to demand we convert to Islam or to become dhimmis. But as you s, our very title here is "No Dhimmitude." Sorry, King-ky, you are out of luck. You have over-played your hand.

Muslims world-wide have considered the Western world to be homogeneous, thinking all westerners are decadent and drunk or lazy and drug-addled and cowardly. Well, sir, the joke is on you. It's a coming Crusade you see vaguely in the dust ahead of you. You're over. Go back to your grave.