"And I will bless them that bless thee, and curse him that curseth thee: and in thee shall all families of the earth be blessed." Genesis, 12:3. King James Bible 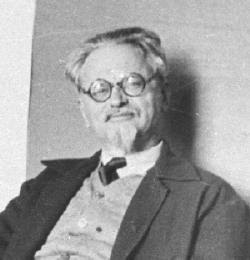 Leon Trotsky (1879 – 21 August 1940), born Lev Davidovich Bronstein. During the early days of the Soviet Union, he served first as People's Commissar for Foreign Affairs and later as the founder and commander of the Red Army and People's Commissar of War. Born in Kirovohrad Oblast, Ukraine, child of a well-to-do farmer. He died in exile, assassinated in Mexico City.

Ze'ev Jabotinsky (1880 -- died August 4, 1940) was a Revisionist Zionist leader, author, orator, soldier, and founder of the Jewish Self-Defense Organization in Odessa. He also helped form the Jewish Legion of the British army in World War I, and was a founder and early leader of the militant Zionist underground organization, Irgun. Born in Odessa, Ukraine, he was raised in a Jewish middle-class home. He died in exile of a heart attack in New York City. 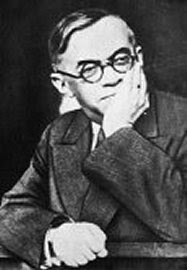 Born a year apart in Ukrainia, these men, writers, political theorists, founders of national armies, Trotsky and Jabotinsky, died in North American exile within weeks of each other. Those primal armies, now manned by the children of past ideologies, fight this deadly war today. Pick your Jew.

Today we pick our sides in our culture war according to our sympathy for world revolution and collectivism or we opt for privacy and Zionism. A little as most will be aware, we are deeply influenced by Trotskyites or by Jabotiniskyites. It's likely most people on the street haven't heard of either man. Ignorance seldom stops people from having ideas about issues. We follow, in a deep sense, one or the other of these men whether we know of them or not.

Most of us are automatically against fascism. We might not know what it means, but we know we hate it and that we hate fascists themselves because they are evil, they are racists, they are Nazis. So, when group names itself, "Unite Against Fascism" and declares it is against fascists, who would oppose that? Other than fascists, racists, and Nazis, of course.

Unite Against Fascism is an anti-fascist organisation in Britain. It describes itself as a national campaign with the aim of alerting British society to the threat of the far right — in particular the British National Party (BNP) — gaining a foothold at local, national and European elections, arguing that "there is a real danger that the BNP could get a significant platform in elected institutions."[1] Its chair is the former Labour Party mayor of London Ken Livingstone[2] and its joint secretaries are Weyman Bennett of the Socialist Workers Party and the Anti-Nazi League, and Sabby Dhalu, formerly of the National Assembly Against Racism (NAAR).

Stating that it seeks to unite a broad spectrum of society, the organisation has signatories and members from other mainstream political parties, including Conservative leader David Cameron, as well as trade union leaders, prominent members of the arts, bands and other organisations.

Maybe this is not all it seems to be. Maybe the UAF is just as bad as those they claim to be against. Maybe they're basically Trotskyites who have roped in fools like the buffoon leading the British Conservative Party, for example, a man too stupid to know what he's doing in politics.

On 8 August 2009, UAF supporters and English Defence League supporters clashed at a protest planned by EDL in Birmingham, resulting in 35 arrests. ... On 10 October 2009, 1,400 UAF supporters gathered to oppose an EDL-organised demonstration in Manchester. Forty-eight people were arrested during the protests. ...

On 31 October 2009, about 1,500 UAF supporters met in Leeds city centre to stage a demonstration in opposition to a protest organised by the EDL, which was attended by up to 900 of their supporters. Eight people were arrested for public order offences after minor scuffles. West Yorkshire Police and Leeds City Council issued a joint statement in which they thanked the public and participants of both demontrations for their patience and consideration.

On Saturday, 20 March 2010 demonstrations from Unite Against Fascism (UAF) and the English Defence League (EDL) in Bolton led to violent confrontations and the arrest of at least 55 UAF supporters, including the UAF protest organiser Weyman Bennett, on suspicion of conspiracy to commit violent disorder. At least three EDL supporters were also arrested, and two UAF members were taken to hospital with a minor head and a minor ear injury. After Bennett was charged and released, he accused the police of being hostile to anti-racists and called for an inquiry into the police's actions that day. The police, while criticising the EDL for "vitriolic name-calling" blamed people predominantly associated with UAF for provoking violence and said that they "acted with, at times, extreme violence."

The point is that if the Left sets the political agenda, then Obama, for example, becomes a centrist, and Trokskyites become just more enthused Democrats. In effect, Trotsky, though not well-known to the average American, becomes popular and respectable in the form of Obama supporters on the left of the Left. Thus, having made no attempt to understand the situation, relying on the best good faith one has in public intellectuals, one chooses to support Trotsky over Jabotinsky. Who'd have thought?

In the UK in the 1980s, the entrist Militant tendency won three members of parliament and effective control of Liverpool City Council while in the Labour Party. Described as "Britain's fifth most important political party" in 1986[48] it played a prominent role in the 1989–1991 mass anti-poll tax movement which was widely thought to have led to the downfall of British Prime Minister Margaret Thatcher. Almost all of the large far left parties in the UK are led by Trotskyists, including the Socialist Workers Party (Britain), the Socialist Party (England and Wales), Respect – The Unity Coalition and the Scottish Socialist Party.

Obama has more in common with the left of the Democratic Party than he does with the Left of the Republican Party. When he's informed by Trotsyites, as is obvious from the influence of labour unionists among the Democratic Party's left, one sees that Sarh Palin is, as a likely unconscious supporter of Jabotinsky, a "fascist." But, do American leftist unions actually spout Trotsky at union meetings? No more so than does Sarah Palin recite Jabotinsky. But there those men stand, forever opposed, always at war, and our influences whether we know of them or not. Obama is an "anti-Zionist" and Palin is a Zionist herself. Trotsky. Jabotinsky.

The Socialist Workers Party (SWP) claims to be the largest far left party in Britain.[1] It participates in a number of campaigns such as Unite Against Fascism and the Stop the War Coalition. The SWP has an industrial department which co-ordinates its work within the trade unions and a student section, the Socialist Workers' Student Society, that has groups at a number of universities.

Our political choices, whether we see it or not, contain a lot of baggage. Trotsky? Or Jabotinsky?