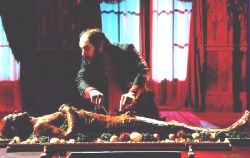 The Burton family of England, kidnapped recently by poor suffering Palestinian! People!, it is now known, have been eaten. Muslims, driven to madness by the constant bombardment of Zionist propaganda commercials advertising fast food take-aways, have plunged into a volcano of hatred and eaten the Burton family. The International Red Cross is shipping in Tums and Rolaids as part of an emergency airlift to relieve the further suffering of the Palestinian! People!, the only people on Earth who suffer. The U.N. is supervising the distribution of the medical supplies, and will grant further aid in the form of "bitters" for stomach ailments.

"It's a fuckin' tragedy," stormed one U.N. aid worker. "After all the suffering the Palestinian! People! have had to suffer, now they have to suffer this too. No one else suffers. It makes me want to kill the Jooooos."

We interviewed one of the cooks at the Feast of al-Bur tun and found this amazing story of Palestinian! People! suffering.

"First we cut their throats," said Haj Wadi Jebel, "to purify the infidel flesh; then we sauteed the chunks in a deep layer of olive oil seasoned with garlic and fennil. We used two whole cloves per kilogram for the light meat and four for the dark meat. Once we'd finished the saute, which seals in the juices, we spitted the meat and roasted the pieces over a low charcoal fire on the brazier until it was nicely cooked, a bit crusty on the outside, and tender at the bones. The eyes, brains, and unclean parts we fed to our women, but the better parts we had with rice and fuul, tomatoes, onions, and pita."

Then we rested for a while with our habibi's heads on our laps, stroking their fine faces and singing songs of paradise, until suddenly we felt ill, our bowels cramping, our suffering becoming intolerable. We cried out to Allah: 'Allah, have mercy on our bowels.' But Allah is all merciful, and our pain continued."

The problem, Haj Wadi Jebil explained, was the Zionist death rays beamed into the city of Gaza.

"We will defeat the Zionist plague and drive them into the sea," he said. We will ride giant spiders like those we saw on the television in Iraq, and the Zionists will all die, even if they hide behind rocks and trees. All we must do is rid ourselves of these terrible shits first, Allah willing."

France condemned the Zionist occupiers in the U.N. when word reached them. Said Guy Mange-Merd, head chef of the Sorbonne Academie du Bouffe: "The poor Palestinians! Peoples! have suffered enough. From now on, only the finest Burtons will be sent to Gaza to be prepared by our very own highest class graduands. In memories of the suffering Palestinians! Peoples! I have made this recipe I call Burton le Merd, in honour of myself and the suffering gourmands of Gaza."

Palstinian! liberation fighters vowed to unleash a further stinking volcano of hatred in the direction of the Zionist entity in retaliation.

Dag,
This is a really big scoop. (I can't believe you were able to stand knee high in such a scoop without vomiting, by the way.)

I think this needs internet wide dissemination. I would suggest beginning by posting this at IBA.

The fact that those wily, pushy, plotting, rude, Je ... I mean, Israelis would actually oppress the poor, poor Palestinians to the point where they are forced to such a delectable Cannabilistic carnivale, is just disgusting.

Next time, we need to send over some sweet meat, like say, Tom Cruise.

Vanilla Cruise. Yum. Covered in a Susan Sarandon Wrap to keep it fresh.

Oh yes, and a bit of Gwyneth Paltrow. She looks tasty.

Jeez, let's see how demented we can get. Maybe we can start doing some necrophiliac blogging.

I have a real philia for dhimmi necros. I like to sign my death fatwas with Sean Penns too. 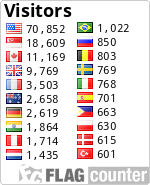